I have high regards for our traditional rulers – Dr Bin Salih 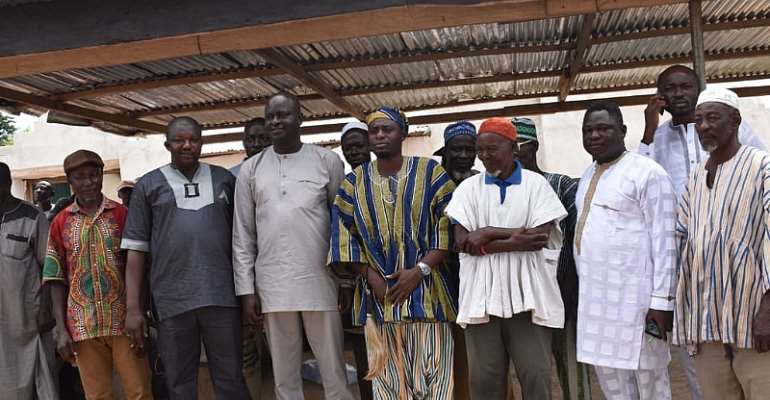 The Upper West Regional Minister, Dr Hafiz Bin Salih, has said he has high regards for traditional authorities in his community transformation agenda since they are the first point of call whenever the people have any challenge.

“I have decided that I am going to liaise with you so that together we can find solution to the many problems that confront our people”, he noted.

Dr Bin Salih revealed this at Zini in the Sissala West District when he called on the chiefs and people of the Zini Traditional Area, Lambussie and Gwollu last Saturday.

The Regional Minister was accompanied by his deputy, Hon Amidu Chinnia Issahaku, the Upper West Regional First Vice Chairman of the New Patriotic Party (NPP) and the District Chief Executive of the Sissala West, among others.

“As Regional Minister, I cannot pretend to know the problems and challenges of this area more than you the chiefs. That is why I want to strike an accord with you so that per our interaction I will always have first-hand information about happenings within the traditional area”, Dr Bin Salih explained.

“We know the task ahead of us, so we will not allow any satan to come between us”, the Regional Minister said, noting that it was through unity that they could bring development to the region.

He also assured the people that he would assist them in providing wards for the health facility in the community, as requested by the chief, to help alleviate the plight of the people.

The Zini Chief, Kuoro Abu Niinia Sokabei Diyaka V, on his part, appealed to the Regional Minister to facilitate the timely completion of the only Senior High School in the area to enable their children to also benefit the Free Senior High School (SHS) policy.

He also noted that the community had mobilized to construct a 50-bed capacity ward for the health centre in the community to help reduce the drudgery in accessing health care services at referral centres in Gwollu or Nandom.

He regretted that the patients sometimes lose their lives in the process and appealed to the Regional Minister and his deputy to commit themselves to help execute the project to improve healthcare delivery in the area.

Kuoro Diyaka V also entreated the leadership and members of the NPP to sacrifice their personal interest for the collective interest of all to propel the growth of the party and nation as a whole.

The Paramount Chief of the Lambussie Traditional Area, Kuoro Issaka Zeng-eh Kazie Eenjie II, commended the NPP led government for the One-Village-One-Dam (1V1D) project in the district but that some of the dams under the project were poorly constructed and could not serve their intended purposes.

Kuoro Eenjie II also touched on the deplorable state of roads in the district which needed immediate attention.