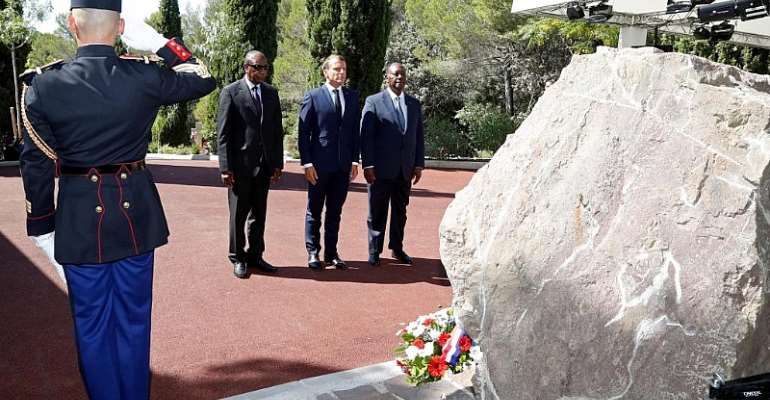 French President Emmanuel Macron has paid tribute to the 'heroes' of the Allied landings on the Mediterrranean coast 75 years ago, praising in particular the sacrifices made by fighters from France's former colonies in Africa.

"The glory of all these soldiers of the Liberation is immense, and our gratitude must never fade," Macron told veterans at the Boulouris National Cemetery in Saint-Raphael, in the south of France.

"We will never forget anything, nor anyone," he insisted.

Yet for decades, France's African fighters, who helped turn the tide on World War Two in the Allies favour, were forgotten, Macron admitted.

They "did not have the glory and the esteem they deserved for their bravery," the president said, adding that through their spilled blood, "France has a part of Africa in it".

Macron's speech was keenly awaited, after the emotion sparked by the tribute of former leader Jacques Chirac in 2004. It received a mitigated response.

"It's rather late, but it's better than never," said political analyst Joseph Ochieno.

"This is something that is long overdue (...) Africa needs to get the credit that it deserves. The sad thing is: why did France and the Allies downplay and nearly erase the fact that Africans contributed their blood, lives and commitment to the cause of freedom," he told RFI.

Perpetuating the memory of African veterans
On 15 August 1944, French forces, made up of soldiers from the former colonies, took part in Operation Dragoon, which enabled France to take a lead role in freeing itself from Nazi Occupation.

"These men make all of Africa proud, and express the essence of France: a commitment, a love of liberty and greatness, a spirit of resistance united by courage," Macron asserted at Thursday's ceremony.

He was joined by the presidents of Cote d'Ivoire and Guinea, Alassane Ouattara and Alpha Condé to underscore the crucial role played by France's African forces.

Macron called on mayors in towns and cities to rename streets, public squares and monuments after some of the African soldiers who fought for France.

Reacting to the announcement, Aissata Seck, the mayor of Bondy, a town on the outskirts of Paris, said her town had already put measures in place to honour the memory of colonial fighters even before Macron's greenlight.

"Twenty eight riflemen from Senegal live in our community and help to transmit the memory of the past," she told sister channel France 24, adding that a memorial square was also in the pipeline.

Duty to remember
The French president insisted Thursday on the duty of each citizen to "preserve" and "transmit" the memory of the landing and of "this freedom brought from the Mediterranean", telling his audience that it would help fight "obscurantism, ignorance and oblivion".

Earlier in the ceremony, which kicked off with "Le Chant des Africains", the unofficial anthem of the Pied-Noir community in France, Guinea's Condé also paid tribute to "Africa's sons who found eternal rest on French soil" and praised the "shared memory of the French and African people."