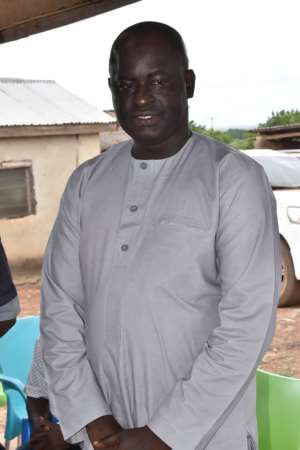 The Upper West Regional Minister, Dr Hafiz Bin Salih, has reiterated his commitment to the Chiefs and people of the Gwollu Traditional Area in the Sissala West District to ensure that the Wa Polytechnic attains a Technical University status.

He said converting the Wa Polytechnic, which was renamed after former President Dr Hilla Liman, into a Technical University would be one of the legacies that he would leave behind as a Regional Minister.

Dr Bin Salih gave the assurance in response to a request by the Paramount Chief of the Gwollu Traditional Area, Kuoro Kuri Bukkutie Liman IV, when he paid a courtesy call on him on Saturday to be abreast with the challenges affecting the people in the area.

The Minister was accompanied by the Deputy Regional Minister, Hon Amidu Chinnia Issahaku, the Regional First Vice Chairman of the New Patriotic Party, and the Sissala West District Chief Executive among others.

“Nobody is more interested in the conversion of the Wa Polytechnic into a fully-fledged technical university than I. if it is done at a time I am a Minister it will inure to my benefit”, he said.

The Regional Minister, however, noted that the school needed some category of lecturers as part of the requirements for a Technical University and added that the school authorities had requested clearance to employ those lecturers.

Dr Bin Salih further noted that a number of culverts in the area had been awarded on contract and that the contractors would soon report to site to work on them and asked the chief to present two major roads that needed to be tarred for onward submission to the sector Minister for consideration.

The Regional Minister also hinted that the distribution of the fertilizer meant for the Planting for Food and Jobs (PFJ) programme would be decentralised to centres at the community level to make it readily available to farmers.

“With your prayers, we will ensure that the vision of his Excellency the President, Nana Addo Dankwah Akuffo-Addo has for Ghana is implemented for the benefit of the people”, Dr Bin Salih added.

On his part, Kuoro Liman IV lamented about the deplorable state of security in the area and urged the Regional Minister to use his good office to help improve the security situation within the district.

He explained that they were experiencing cross-border crimes in the area but regretted that the police in the district did not have the needed logistics such as vehicles to fight those crimes.

Kuoro Liman IV also told the minister that he had developed a business plan to process shea nuts into finished products which was approved by the Ministry of Trade but that funding was a major challenge, and appealed to the minister to support the project to make it a success.

Other challenges the Paramount Chief identified included the poor road network in the district such as the Hian – Jefisi – Guollu and Duu – Hain roads as well as farmers’ inability to access fertilizers meant for the PFJ programme.