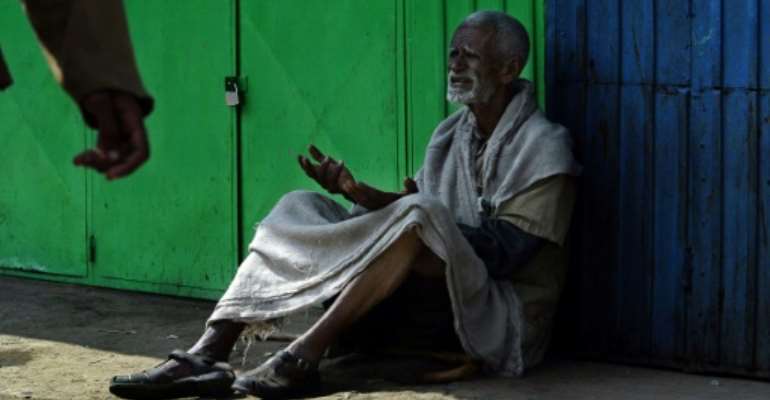 Begging could soon be banned in Addis Ababa, according to laws under discussion. By MARCO LONGARI (AFP)

Officials in Ethiopia's capital are weighing bans on sex work and street begging, the latest in a series of measures intended to clean up the country's image, the mayor's office said Thursday.

Draft legislation detailing the terms of the bans is still being finalised.

But Feven Teshome, press secretary for the Addis Ababa mayor's office, told AFP that it was necessary to combat worsening "social problems" in the city of more than three million people.

"We estimate there are over 50,000 beggars and more than 10,000 street prostitutes in Addis Ababa. The draft law aims to eliminate these social problems that also create a bad image for Ethiopia," Feven said.

Sex work is currently not criminalised in Ethiopia, and Feven said the proposed ban in Addis Ababa would only apply to solicitation that occurs on the street.

That means it would not affect bars, massage parlours, guesthouses and other sites where sex work is sometimes rampant.

Both sex workers and their clients would be subject to punishments that could take the form of fines or jail time, Feven said.

Similarly, the ban on street begging would also target those who give beggars money.

In May, Ethiopian officials passed nationwide restrictions on alcohol advertising and smoking in public places.

Those measures also banned the sale of alcohol to anyone under 21 years of age.

In an effort to enforce the smoking restriction, security forces have in recent months raided night clubs suspected of offering shisha, or water pipe, smoking, briefly detaining customers and staff.

Last month, officials in Addis Ababa banned most motorbikes in a bid to curb crime.

As they prepare to crack down on sex work and street begging, Feven said officials were attempting to provide "alternative job opportunities" for those affected.

But she acknowledged that both activities can be lucrative, making them difficult to eliminate entirely.

"Some of these beggars can earn up to 7,000 birr (more than $200) and similarly those engaged in street prostitution can earn incomes that are far higher than ordinary salaries," Feven said. The figure applies to earnings per month.

City officials plan to hold further discussions on the legislation with religious and community leaders before putting it to a vote.