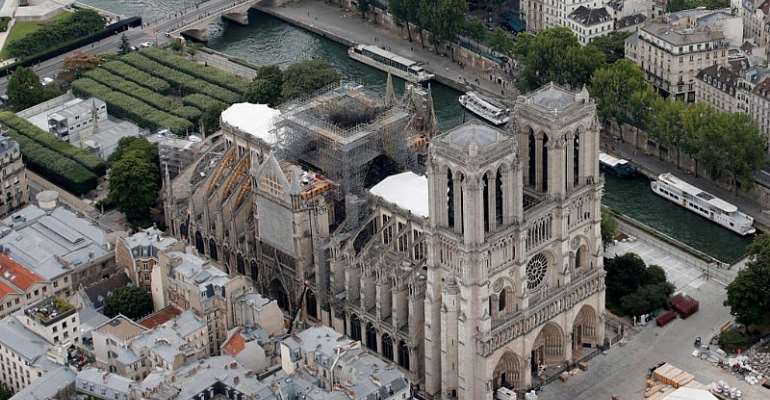 Notre-Dame cathedral in Paris will host an Assumption mass on Thursday, four months after it was ravaged by a devastating blaze. The procession will kick off near the church, which remains closed to the public due to hazardous levels of lead contamination.

Unlike last year's procession, where some 10,000 worshippers were able to move freely between Île Saint-Louis, an island on the Seine adjacent to Île de la Cité where the cathedral is situated, this year's procession was distinctly more low-key.

Dozens of worshippers and curious onlookers gathered at 9h30 local time at Saint-Louis bridge, opposite Notre-Dame, for a procession culminating at the Saint-Sulpice Church in Paris' 6th arrondissement.

The cortege was accompanied by a statue of the Virgin Mary dating back to 1830 that was bestowed by the king of France Charles X.

At the Church of Saint-Sulpice, the Archbishop of Paris, Monsignor Michel Aupetit, led worshippers in the traditional Solemn Mass of the Assumption.

The Assumption, which takes place every year on 15 August, refers to the Virgin Mary being assumed body and soul into heaven at the end of her earthly life.

“Assumption” is different from “ascension” because one is passive (i.e. one is assumed) and the other is active (i.e. one ascends).

The traditional torch-light ceremony at the foot of Notre-Dame that was meant to take place on Wednesday 14 August was cancelled this year.

The cathedral remains closed to the public.
Up to 150 workers have been working at the cathedral daily since the fire on 15 April, continuing to remove debris and stabilise the structure.

However, in recent weeks, worrying levels of lead have been detected at the site, forcing workers to seal off surrounding areas.