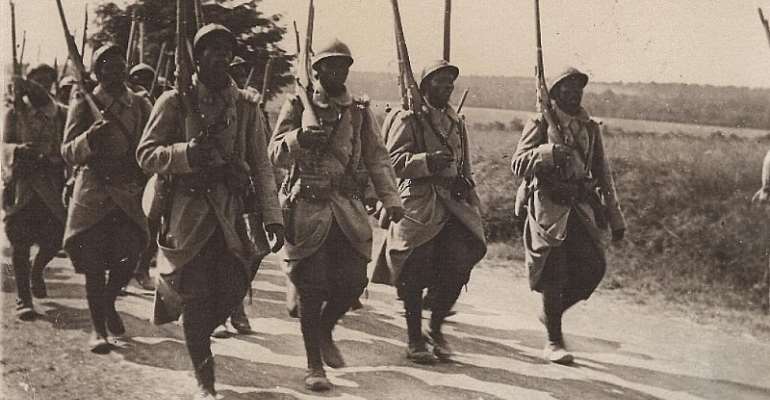 French President Emmanuel Macron will mark the 75th anniversary of the Allied invasion of Southern France on Thursday, August 15. Known as "the other D-Day", this second landing involved the massive deployment of soldiers from France's former colonies during World War Two. Today, their sacrifice has been largely forgotten.

Macron will gather on Thursday at the Boulouris National Cemetery in Saint-Raphael, the site of one of the beaches in Provence, where some 400 troops were killed during the landings.

Flanked by his Ivorian and Guinean counterparts Alassane Ouattara and Alpha Condé, and his predecessor Nicolas Sarkzoy, Macron is expected to underscore the crucial role played by France's African forces.

Unlike the Normandy landings, Operation Dragoon as it was codenamed, saw a massive involvement by French soldiers, mainly from France's colonies in Africa and the Caribbean.

The operation was crucial in accelerating the German defeat, and emphasised Paris' role in its own liberation.

Pivot in France's history
In the early hours of 15 August 1944, the sails of more than 2,000 vessels, including 800 battleships, rose up against a crisp, blue sky, crossing into the Mediterranean Sea. By the time night fell, about 100,000 men had landed on the French coast.

The display was so powerful that Adolf Hitler ordered his troops to retreat from southern France within three days, except for the strategic ports of Toulon and Marseille. But even these towns fell a week later.

In 2014, former French President François Hollande described Operation Dragoon as the pivot, which had "enabled France to become what it is today."

While D-Day in Normandy had dealt a blow to the Nazis, Hollande said the southern invasion had done the rest.

So, why is it forgotten?
Operation Dragoon came two months after the Normandy landings. It was thus two months after the world had already witnessed the extraordinary firepower of the USA in the Battle of Normandy, which has formed the subject of numerous American films.

Moreover, there are gaps in France's collective memory, according to French journalist and activist Audrey Pulvar.

"What is missing is for French people to own this story as theirs, regardless of their origin, skin colour, or where they come from," she says.

"When you think of France's liberation, the first thing that comes to mind is images of Paris being liberated from Nazi control or the American soldier in his jeep. You never think of the soldier from France's colonial forces who liberated Marseille. It's time for us to put this soldier into France's collective memory. Only then can we say we have won," she told RFI's French service.

Whitewashing the past
Pulvar is one of several people to have signed a petition last month urging the French government to give a dignified tribute to soldiers from its former colonies.

There has been criticism in the past that their sacrifice has not only been forgotten but whitewashed.

In the autumn of 1944, as France was on the verge of being liberated, soldiers from the French colonies were abruptly discharged.

In his memoirs, General Charles de Gaulle wrote that this was a necessity, to ensure that only French troops remained the face of the Resistance.

This is why there were no non-white faces that took part in the liberation of Paris, and hence why they do not exist in France's collective memory.

Equal pensions
In recent years, there have been efforts to recognise the rights of survivors.

In 2017, ex-president Hollande awarded French citizenship to African war veterans who had fought for France in World War Two.

In 2010, his predecessor Nicolas Sarkozy, who will be at the ceremony on Thursday, also bowed to public pressure by announcing that pensions would be the same for all veterans, irrespective of their nationality or place of residence.

Up until then, a French war veteran would receive something like 460 euros, whereas a Senegalese soldier took home only 193 euros and an Algerian soldier only 60 euros, per month. Today they all receive the same amount.

This harmonisation process, known as 'decristallisation' in French, however, has not put an end to controversy. For a start, many war veterans have now died so cannot benefit from the cash, and those who are alive are demanding back payments.

'Dignified' remembrance
The issue is likely to come up at Thursday's commemoration ceremony, where President Macron will be watched closely.

He is expected to match the rousing speech of ex-leader Jacques Chirac, who on 15 August 2004 invited sixteen African heads of state, to pay tribute to the "immense sacrifice" of these "forces of freedom."

This time round, there will be only two African leaders at the commemoration to honour France's "B Army", made up mainly of African garrisons in countries still under French colonial rule.

These soldiers "must be remembered at the height of their sacrifice," insists Pulvar.

The journalist, who was born in the French colony of Martinique, became the first black female presenter in 2003 to present a prime time, mainstream television news programme on France 3.

Calls for a dignified remembrance of France's African veterans have sharpened in the run-up to next year's Season of African Cultures. The six-month event is aimed at highlighting France's love and connection to Africa.

Many observers point out that Paris can only do this once it gives an honourable tribute to the men who helped make France what it is today.

"Third generation children want to be recognized as French men and women in their own right," she comments.

"For them, owning the story of their great, great grandparents and hearing it related in the collective memory is a way for them to feel French."