After 33 Years In Power Museveni's Biggest Threat Is Musician Kyagulayi 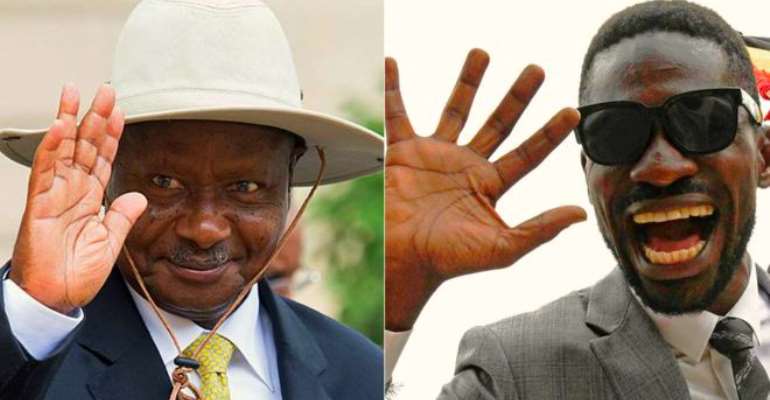 Museveni's biggest threat is Robert Kyagulayi
Ugandan musician, Robert Kyagulayi, popularly known as Bobi Wine, was only three years old when Yoweri Kaguta Museveni, born in 1944, in the Mbarara district of Uganda, became the president in 1986.

The little child who was just three years has now grown to become the biggest threat to the current Ugandan leader, Museveni, who has been in power for thirty-three years.

In Africa, all things are possible, thus; if a former Liberian footballer has become a president, a musician can also be an African leader, after all, they are famous, moreover, the youth who understand what suffering is are firmly behind them.

However, having such an African leader like Museveni in Uganda, Bobi Wine is not having it easy at all towards his political ambitions in his country.

If your music is good, the people will like it and follow you wherever you go, thus within the shortest period in his life, Bobi Wine, who sings in his native language and English, often blended with beautiful reggae notes, has become famous than the country’s president.

The fact that he sings about his childhood suffering in the poorest slums of Uganda and sharing his political opinions portray Museveni as an uncaring bad leader, while that has given Bobi Wine a unique recognition of someone who cares about the suffering of people.

There is no doubt that Wine has become popular than the president and this is a threat to Museveni, therefore, invariably trying his best to silence his oppositions.

Robert Kyagulanyi was supposed to perform at a club on the shores of Lake Victoria but the authorities stopped him, according to them, due to lack of security. Bobi Wine wasn’t happy about that, thus; he went to talk to the press and the police arrested him.

Also, last year, he was arrested for allegedly throwing stones at the president's election convoy and was accused of treason. Kyagulanyi ended up in jail, where he was tortured.

His case sparked protests from international artists such as Chris Martin and Peter Gabriel. After 10 days in jail, the singer-politician was finally released on bail.

Bobi Wine wants to be accepted not only as a musician but an ambitious politician, thus; before entering into politics, he cut off his Rastafarian dreadlocks and contested to win the vacant parliamentary seat of Kyadondo East, a constituency in Kampala.

As an independent candidate, he surpassed both the National Resistance Movement, the ruling party and those for the Forum for Democratic Change.

In one of his songs called Dembe, which ignited his musical and political careers, Wine sings: Lwaki temulabira ku Mandela - Why don't you take inspiration from Mandela

While his fellow musicians sing about women and Museveni, Wine sings about the political chaos, corruption and the suffering of the people in Uganda but Museveni is not particularly interested in change.

In January he signed a law to abolish the 75-year limit imposed to run for president. At the age of 73, he will be able to present himself for a sixth-term in 2021.

The 37-year-old Robert Kyagulanyi has been a Member of Parliament for 2 years and stands up for the interests of the poor. As Bobi Wine, he says sings about democracy and social injustice.

In 2021, Kyagulanyi wants to participate in the presidential elections in Uganda. According to him, President Museveni considers his candidacy as a threat to his own presidential ambitions.

In the past, Museveni is not keen on popular political opponents. For example, he had Kizza Besigye, a previous opposition leader, who was four times his counter-candidate, arrested more than once.

Despite all his efforts, part of the media isn’t given him the support he needs. He was even linked to a drug case but Wine wouldn’t allow anything to break him down.

If his songs are so critical to the Ugandan government, therefore, wouldn't be allowed to give concerts in his own country, then in Holland, he can.

You must, therefore, understand the reason when he went to the Netherlands to play, Ugandans, Nigerians, Congolese, etc; from all over Europe, including the UK, Ireland, and Sweden, came to watch him perform with a Dutch band.