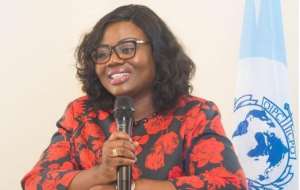 The Director-General of the Criminal Investigations Department (CID), COP Maame Yaa Tiwaa Addo-Danquah says she is focused on resolving the Takoradi kidnapping case and not calls for her resignation.

Speaking at an event organized by the Common Wealth Africa, the under-fire CID Boss remarked that she would not waste time thinking about any possible resignation at the moment.

“When you have everybody calling for your resignation and other things, the question you need to ask is, is that what will solve the problem? There is a problem for us to solve and that is my focus.”

“I have to focus and bring whatever situation we have to the conclusive stages not to waste time thinking about whether you want to resign or you don't want to resign. So when it is time for me to leave, I will leave because somebody was there and I am here and another person will be here.”

After the human remains were found in a sewage system near the home of the main suspect in the kidnappings, Samuel Udoetuk Wills, calls for the resignation of COP Addo-Danquah were renewed.

A family spokesperson said the hierarchy of Ghana's security apparatus must resign if it is established that the human remains were that of the missing girls.

The families feel the CID had been offering false assurances over the past eight months during which investigations have been ongoing.

“Government has a lot of questions to answer not only to the families but to a lot of families who have girls. How do you basically assure families with 18-year-old and 20-year-old girls that they can go about their business in safety? And the irony of this is that we found the Canadian girls but we couldn't find our own girls.”

In April, the CID Boss assured families of the missing persons that the police knew the whereabouts of the three kidnapped girls; Priscilla Blessing Bentum, Ruth Love Quayson and Priscilla Kuranchie.

The following month, the CID Boss said her comments were misunderstood and only meant to give the families hope.

Before what was described as a public relations lapse, families of the kidnapped girls' had already been appealing for the CID Boss' removal over the purported lack of urgency in the police’s handling of the case.

A former Inspector-General of Police (IGP), John Kudalor, had his say on such call urging for some patience.

In brief comments on the case on Eyewitness News, Mr. Kudalor said it will be too early to call for the removal of the CID boss “because we have not gotten to the end of [the case].”