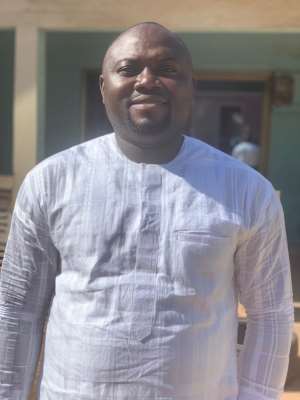 My attention has been drawn to a concocted story which was published in the Modernghana news portal on Oct 30,2018| Crime & Punishment| that has recently gone viral on several social media purported to have been a real case analysis that happened to my persona.

I state on authority and deny flatly that, I Rockson Adu-Boahen have not been involved in any criminal case of that sort as the news reported.

I am critically concerned about the level of some elements among our political dispensation who have decided to peddle falsehoods against my persona. But as usual, and per my level of intelligence never to replicate same.

I have advised myself never to fall for their pettiness but to rather set the records straight for the people who in me trust and the people of Ghana at large.

I knew Ghana First Company Limited through a friend Forkuo who introduced me to Adomako as a waste management company that give out contracts to prospective contractors. They had 12 seater toilets which cost GH 262,000, 16 seater for GH 325,000 and GH 504,000 for 20 seater toilets facility

These young men came to me and said they wanted a contract and I told them I can help but will take 10% of the total value which they accepted and issued an amount that is not close to the 3% to pay Ghana First company Ltd.

Since their amount couldn't pay that of Ghana first Company, I told them to top up which they promised I will get it in two weeks. But in the second week, they came demanding for their money which I also requested for two weeks to make that payment.

Least did I know they had gone to lodge a formal complaint with the East Legon police Division. I was called by Mr Frank Akuley, Chief Executive officer ( CEO) of Ghana first Company to go and respond accordingly to which I did and was granted bail. Since then I have settled the young men with the amount due them as requested.

It's important to place on record that, Rockson Adu Boahen was never arrested from any hideout by the police as reported but rather, I went to them on my own.

Again, I have been dealing with Ghana first Company for a long period of time and have gotten contracts from them for so many people. I am not a fraudster and have not defrauded anybody. The cloning of signature which was stated was also false.

It’s rather unfortunate that they want to use me for their public stunts and gimmicks instead of finding money to pay the contractors that have worked for them and are yet to pay them.

They should channel such energies to sourcing funds to pay contractors and not to create public disaffection for me.

I am therefore asking the general public and the good people of Ghana to disregard the false news of faceless people and their machinations.