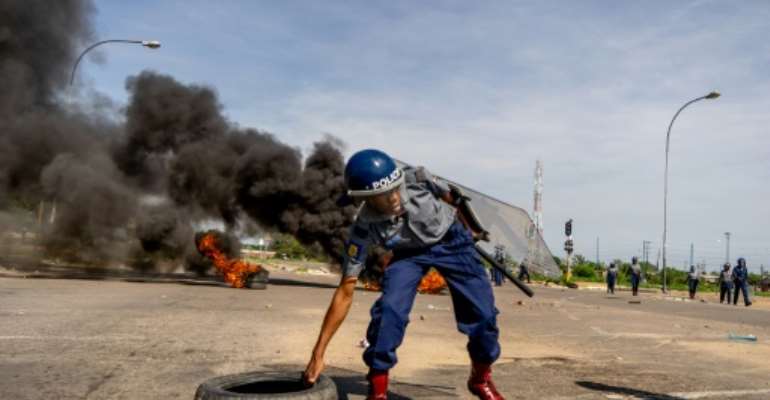 The protests will be the first since rallies in January against President Emmerson Mnangagwa's decision to hike fuel prices ended in clashes with troops. By Zinyange AUNTONY (AFP)

Zimbabwe's main opposition party vowed Wednesday to go ahead with protests this week against the worsening economy, dismissing government threats to stop the demonstrations.

The protests will be the first since rallies in January against President Emmerson Mnangagwa's decision to hike fuel prices that ended in deadly clashes with troops.

"It's all systems go, we are emphatically clear that on Friday we are going ahead in Harare," the MDC party's spokesperson Daniel Molekele told a press conference.

He said the "peaceful" demonstrations will roll out across four other cities in the next few days.

Police have refused to sanction this week's planned marches.

Home Affairs Minister Cain Mathema has warned the police are ready to deal with protesters, raising fears of unrest.

"The police are ready to deal with unruly elements who want to cause alarm and despondency in the country," Mathema said in a statement last week.

But the MDC is adamant that the constitution only requires that the police be informed of the planned protests and that the party does not require police authorisation for the march.

The ruling Zanu-PF party's youth wing has also weighed in, threatening to block the demonstrations.

Pupurai Togarepi, the party's youth league leader, last week warned that "any thuggery will be confronted with equal measure."

Christian leaders have called on Mnangagwa and opposition leader Nelson Chamisa to explore "the possibility of accelerating much-needed dialogue in this time of deepening national division and despair".

Mnangagwa, who took over from long-time ruler Robert Mugabe after a military-led coup in November 2017, and then went on to win disputed elections a year ago, has promised to revive the economy and woo back investors.

But the economy has declined even further, with fuel and bread in short supply, rolling power outages and prices of basic items skyrocketing.

The June annual inflation hit an unprecedented 176 percent, among the highest since the country dumped its Zimbabwe dollar for the US and other international currencies in 2009 amid massive hyperinflation.

The government has now decreed it will not publish annual inflation figures until next February.

Last month Finance Minister Mthuli Ncube proposed to raise electricity tariffs by between 200 and 400 percent to ease power shortages that have led to rolling power cuts lasting up to 18 hours across the country.

Fuel has gone up seven times this year alone, representing around 600 percent increases in the local currency since January.

Around five million people, or a third of the 16 million population, reeling from a drought and the high cost of food, are facing severe food shortages. At least half of them are on the cusp of "starvation", UN aid agencies said last week.