Battle of the Bogside: Derry marks 50 years since riot that changed N Ireland 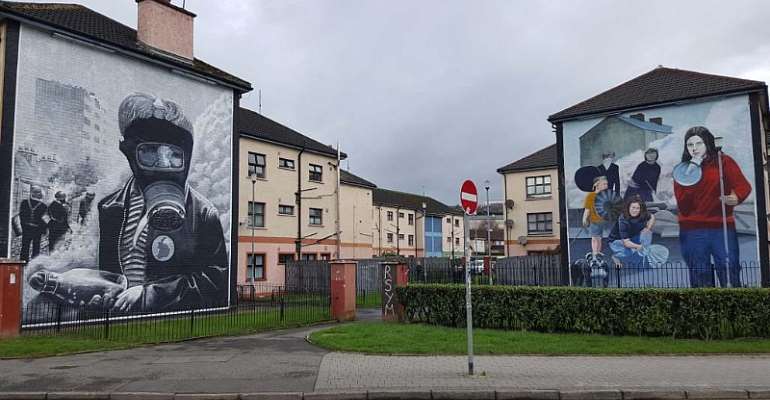 Fifty years ago British troops marched into Derry, Northern Ireland, to break up fighting between police and Catholic civil rights protesters in a move that spurred the decades of unrest known as the Troubles.

While Catholics outnumbered Protestants in the medieval city, it was the latter who controlled Derry's council. Tensions were simmering amid high unemployment and poor housing for Catholics – who were also disproportionately blocked from the electoral process.

This was the backdrop for fighting that began on 12 August, 1969, when Catholic residents of Derry's western Bogside area clashed with Royal Ulster Constabulary (RUC) state police over a decision to allow the Protestant Apprentice Boys fraternity to march nearby.

Their annual Siege of Derry parade – a display of Protestant triumph over the Catholics in 1689 – was seen by Catholics as “a festival of hate” says Paul Doherty, who takes visitors to Derry on history tours through the Bogside.

March for equal rights
Doherty was five years old when the Battle of the Bogside broke out – and when his father Paddy, a member of the Northern Ireland Civil Rights Association, took to the streets alongside his neighbours. “People in Derry were marching for equal rights and civil rights,” Doherty explains. “Discrimination and unemployment was stark and it was real.

“Despite a big majority of Catholics, the city was controlled by Unionists – because of gerrymandering. Only ratepayers got votes. If you didn't have a property you couldn't vote.”

Tensions were running particularly high ahead of the 1969 Apprentice Boys parade, which came weeks after the death of Sammy Devenny – who succumbed to his injuries three months after police entered his Bogside home and beat him in front of his children.

“Because of Devenny's death, which the community had not yet recovered from, the people of the Bogside reacted to the Apprentice Boys march going ahead,” Doherty says.

Britain's longest-ever continous campaign
The result was three days of rioting that saw the people of the Bogside erect barricades to prevent the RUC from entering. For the first time, police used toxic CS gas to put down the protests – which had also begun to spread to Northern Irish Catholic heartlands in Belfast and elsewhere.

The arrival of British troops was a watershed moment for Northern Ireland. What was intended to be a temporary intervention to restore order instead lasted 38 years – becoming the longest continuous campaign in British history.

Doherty would only have a few more years before his father, aged 31, became one of 13 people murdered by the British Army during the 1972 “Bogside Massacre” more commonly known as Bloody Sunday.

This day marked a turning point in the Catholics' struggle, Doherty says, because media was focused on Derry and journalists were able to document many of the events first-hand.

“From afar, Bloody Sunday was one of many atrocities, but the media of the world was here, witnessing the Parachute Regiment – who were only brought in from Belfast for one day – carrying out public executions of civil rights protesters on the streets of Derry,” Doherty says, adding that most of the victims were shot in the back as the fled.

Today a historical landmark commemorates the Free Derry zone that existed from 1969 to 1972 when the people of Bogside barricaded the streets to keep the British Army out. Walls are adorned by murals – one of the most famous of which proclaims “You Are Now Entering Free Derry”.

The murals are popular with tourists, with Northern Ireland's tourism board putting political murals as the eighth most visited attraction in the entire country. The Museum of Free Derry, which tells the story of Bloody Sunday, welcomed 35,000 visitors in 2018.

As the years pass, though, some argue the murals stop old wounds from healing. Of course others feel they're an important reminder of the violence of the past.

“Most of the murals are very educational and very important; most are not of armed men with masks and balaclavas,” says Doherty. There's still room for progress though, he adds.

“There's one of a soldier with a sledgehammer that may be less relevant … I'd also like to maybe see a mural of Martin McGuinness in the Bogside as well.”

‘50% + 1’ To Pick President Is Constitutional Misrepresentat...
26 minutes ago