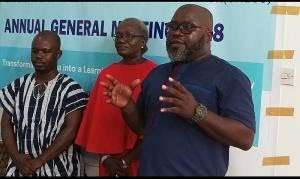 The General Assembly of Ghana National Education Campaign Coalition (GNECC) has relieved Kofi Asare of his position as Chairman of the Coalition following a resolution passed at a meeting held by members.

According to a statement signed by its National Coordinator, Veronica Dzeagu, the General Assembly took the decision after investigations which revealed that Mr. Kofi Asare did not meet the criteria for election to the office of Chairman of the Coalition per Article 12 of the GNECC constitution.

The statement said "It was discussed and unanimously agreed, following investigations by some members of the Coalition, that Mr. Kofi Asare did not meet the criteria for election to the office of Chairman of the Coalition per Article 12 of the GNECC constitution. It became clear that he came to the office based on false information with regards to meeting the criteria provided."

Chairman Kofi Asare was elected into office in December 2018 by the members of the Assembly after an election was held for persons to occupy various positions. After being crowned Chairman, he assured the coalition of changes and betterment of the organisation.

The General Assembly further disclosed that it has therefore decided to nullify the election for Chairmanship position at the 2018 Annual General Meeting.

"This decision was confirmed by a secret ballot. 100% of members present at the meeting voted for the nullification. One delegate each signed on behalf of delegates from each of the regions present," the statement noted.

According to the statement, it waas unanimously agreed that the powers of the Chairperson should be relinquished to the Vice Chair effective 13th August 2019, for the next 3 months pending the election of a substantive leader.

"The Vice Chairperson, Madam Dorothy Konadu, has duly been informed. All partners should henceforth channel all communication related to GNECC through the Secretariat and the Acting Chairperson.

The Ghana National Education Campaign Coalition believes this resolution supersedes all previous correspondence in relation to this issue.