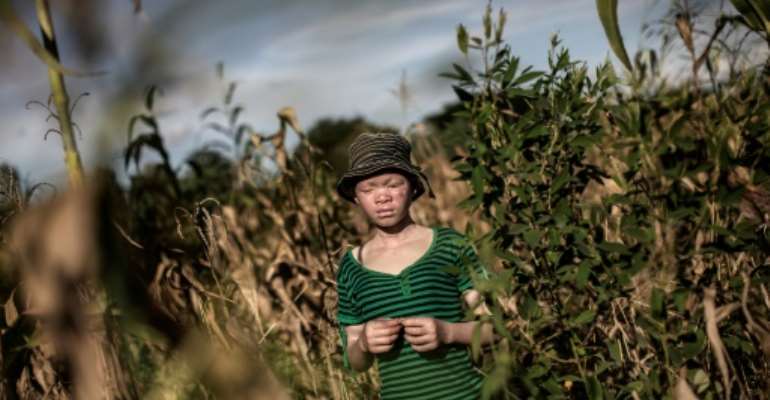 Albinos are often targeted in brutal attacks in Malawi - one of the world's poorest countries - because they have white skin due to a hereditary lack of pigmentation. By GIANLUIGI GUERCIA (AFP)

A Malawi court has convicted and sentenced two men and a woman to death for killing a person with albinism, a judiciary official said on Wednesday.

Malawi has since late 2014 seen a surge in attacks on people with albinism, whose body parts are often used in witchcraft rituals to bring wealth and luck.

The trio chopped off Pepuzani's limbs and later buried the rest of the body in a garden.

The "three were found guilty of (murder and possessing human tissue) and have been sentenced to death," Agness Patemba, judiciary spokeswoman told AFP.

The sentence was handed down in the western town of Mchinji on Tuesday.

This is the second death sentence handed down in the country in the past three months following one in May this year for the murder of 19-year-old albino Mphatso Pensulo in 2017.

Malawi has not carried out any executions since 1994, with death sentences commuted to life imprisonment.

Association of People Living with Albinism welcomed Tuesday's ruling, hoping it will deter attacks on their members.

"This ruling enhances our faith in the judiciary and solidifies our belief that we have them as an advocate in our fight to curb killings and abductions against people with albinism," said Ian Simbota, leader of the association.

President Peter Mutharika in March appointed a commission of inquiry to investigate the spate of attacks on people with albinism after coming under mounting criticism over his response to the attacks.

Albinos are often targeted in brutal attacks in Malawi - one of the world's poorest and most aid-dependent countries - because they have white skin due to a hereditary condition that causes lack of pigmentation.

In many cases, those with albinism are targeted for their body parts to be used in witchcraft.

Of 163 cases reported in the country since November 2014, 22 have been murders, Amnesty International said in May 2019, criticising impunity for the crimes.

Just 30 percent of those attacks have been properly investigated, according to official statistics.