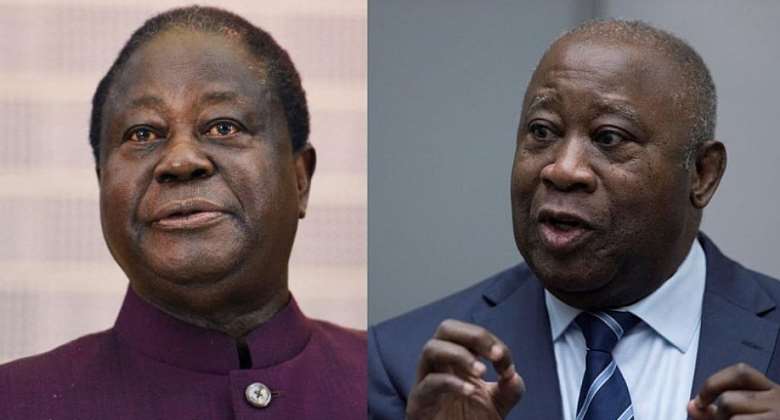 One is currently out on parole in Brussels after being acquitted for war crimes; the other has joined the opposition after walking out of Côte d'Ivoire's coalition government. In recent months, Laurent Gbagbo and Henri Konan Bédié have gotten closer and teir rapprochement could shake up next year's presidential election.

There were no paparazzi on hand to capture the much-anticipated meeting between Gbagbo and Bédié on 29 July in Brussels.

The two men, who have not always seen eye to eye, spoke for over two hours about the situation in Côte d'Ivoire. Yet, it was rumours about a potential alliance ahead of the 2020 presidential election that grabbed public attention.

“I can't tell you what went on exactly between them but what I can say is that they spoke about peace in Cote d'Ivoire," says Geneviève Bro Grébé, a former minister in Gbagbo's government, who recently met with him.

"I'm not aware of an alliance between the FPI (Ivorian Popular Front) and the PDCI (Democratic Party of Côte d'Ivoire). But they spoke about reconciliation and how to achieve a lasting peace in Cote d'Ivoire. Gbagbo called on his supporters to abandon their hopes for revenge. The only revenge they should take, is to work towards stability in Cote d'Ivoire, he told me,” she explained to RFI.

Peace and stability in Côte d'Ivoire is what Ivoirians are yearning for after a history of coups, civil war and violent clashes.

Laurent Gbagbo was blamed for the clashes because of his refusal to concede defeat to Alassane Ouattara in the November 2010 election, which led to him to be charged with crimes against humanity by the International Criminal Court.

But in February this year, he received a shock acquittal by the ICC and is currently on parole in Brussels.

"He is still standing," commented Grébé. "He is still his old self, the smiling, jovial person he was; but he is worried about Africa and about Cote d'Ivoire in particular," she said.

Yet, observers worry whether an alliance between Gbagbo's FPI and Bédié's PDCI is the right way of solving the country's problems.

"I think it could politically work because it would create a genuine choice," explains Paul Melly, an Associate Fellow of the Africa programme at the London-based think tank Chatham House.

2020 heating up
Henri Konan Bédié's supporters have been trying to get closer to Gbagbo's Ivorian Popular Front for months, especially after Bédié pulled the PDCI out of the coalition government with Ouattara in August 2018.

"Until the developments of last summer and now the talk of this FPI alliance, it seemed like an election with a Ouattara-Bédié alliance that's basically the RHDP (The Rally of Houphouëtists for Democracy and Peace) as it's now called; which would have dominated everybody else, and not offered much choice," Melly told RFI.

The race for the 2020 presidential election is offering more than choice, but suspense. President Ouattara has still not disclosed to the public whether he intends to run for a third term.

The other wild card is Guillaume Soro. The former speaker of parliament, who resigned in February to set up his own party, the Rally for Côte d'Ivoire or RACI, announced his candidacy in June.

"Soro was originally a key ally of Alassane Ouattara before striking out on his own," continues Melly. "His party has cross-community appeal particularly among young people, and where he decides to cast his vote could shape the final outcome," he said.

From foes to friends
That brings us back to Gbagbo and Bédié, two former foes who now seem to be willing to work together.

In the not-so-distant past, Gbagbo, a former university professor turned activist, who spent much of the 1980s in exile in France, had few nice things to say about a man whom he felt had falsely claimed the heritage of the country's founding father Félix Houphouët-Boigny. Bédié for his part, called Gbagbo "unfit" to run the country; he did so from 2000-2011.

Today, they have put their differences aside. Both men are united in their opposition to Alassane Ouattara and his politics. Importantly also, both leaders have at one time promoted the concept of "ivoirité".

This nationalistic concept requires both parents of a presidential candidate to be born within Côte d'Ivoire, an argument used to bar Ouattara from running in the 1995 and 2000 election race on the grounds that his father came from Burkina Faso.

Identity politics
"In the past, the whole question of 'ivoirité' and identity was potentially quite dangerous and became very associated with the development of a profound crisis in Ivorian society and politics," comments Chatham House's Melly.

There are fears that a possible Bédié-Gbagbo alliance could revive the sectarian divisions of the past along geographical lines. Côte d'Ivoire has a relatively prosperous south and a very poor north, which straddles Sahel countries like Mali.

"Bédié, a few weeks ago began to talk about these issues again and it caused quite a lot of shock and deep concern," says Melly, evoking the question of how northern Ivoirians are perceived in the south.

"The issue of identity could be quite dangerous if it is not handled sensitively," he told RFI.