Bawku Naba, Other Chiefs Beg Akufo-Addo To Rename Their Schools 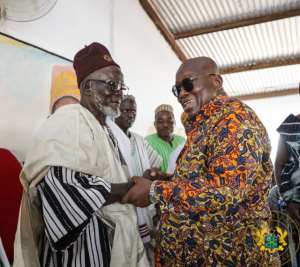 The chiefs and elders of Bawku in the Upper East Region, have petitioned President Akufo-Addo, to rename Bawku Senior High School.

The Bawku Naba, Asigri Abugrago Azoka II, told Nana Addo Dankwa Akufo-Addo giving the school a new name will resolve the confusion in name between it and the Bawku Technical Senior High School.

Delivering his address when President Akufo-Addo paid a courtesy call on him on Tuesday, August 13, as part of the latter’s working visit to the Upper East Region, the Bawku Naba commended the government for the projects being undertaken to improve the standard of living of the people of Bawku.

“…we are currently witnessing other roads and dam projects that your government is adding to them at various places in the traditional area.”

He further told President Akufo-Addo that “we are grateful for the construction of the dams in this municipality. More of these dams are needed in the traditional area as a way of not only creating jobs for our rural people but also curtailing the constant North-South migration of the youth.”

Touching on the political appointments from his area made by President Akufo-Addo, which include Deputy Ministers of State, two Ambassadors, and one Council of State.

The Bawku Naba singled out the Chief Executive Officer of the National Food and Buffer Stock Programme, Hanan Abdul Wahab, for praise, describing his appointment as an inspired one.

“Some of these appointments have already proven to be development-oriented and unifiers amongst the people of Ghana across board. Hanan Abdul Wahab has through various projects touched the lives of citizens in this traditional area,” he said.

He continued, “In April this year, a team of medical doctors paid a courtesy call on me and sought my blessing to undertake a medical screening in the entire Bawku township and left smiles on the faces of beneficiaries. He also donated an ambulance to the Muslim community, and has executed a lot of social support to our people since he was appointed. His efforts need to be recognized. This is very generous of you, and we need to express our deepest appreciation to you, Your Excellency.”

Naba Asigri Abugrago Azoka II assured President Akufo-Addo that they will continue to work at fostering peace within the area.

“We are determined not to allow the disaster of physical conflict to revisit us. The prevailing peace has enabled all of us to go about our normal businesses without hindrance, and, therefore, we need your continuous assistance to finalize the traditional peace process,” he added.

The Bawku Naba continued, “We are now in the middle of our farming season and we are hoping for a bumper harvest this year, thanks to your government’s progressive policies on agriculture, especially the Planting for Food and Jobs programme. Your Excellency, we appreciate also the Free Senior High School facility which we are all enjoying.”