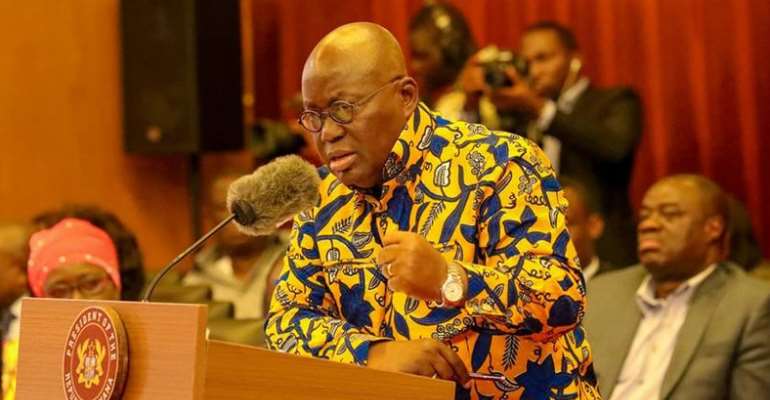 Often times, the learned in our society who decide to vote on prevailing circumstances affecting their wellbeing rather than following political parties blindly, do assert that “all politicians in Ghana are the same”.

Some do posit that the true colours of the typical Ghanaian politicians are revealed when political power is vested in their hands.

Without cudgelling the point, the true colours of the sitting president, Mr Akufo Addo, undoubtedly, have given every meaning to the assertion held by these elites.

In as much the same way, the attitude of the Nana Akufo Addo has also sharply contrasted an aspect of the assertion. In fact, he has demonstrated that some are more honest than others.

Per Nana Addo’s utterances, it is safe to say that some of the Ghanaian politicians seem to know it all only when they in opposition but become too empty when in power.

His penchant for collapsing indigenous businesses, satisfying his cronies, open endorsement of a high level of corruption and a strong appetite for violence is glaring.

Mind you, police offices have been beaten by thugs and hoodlums associated with the ruling party at the Jubilee House, which is the seat of government under Akufo Addo.

Under him, NPP supporters who were recruited as national security operatives received training for a month after which they were handed AK-47 assault rifles to terrorise electorate at Ayawaso during a by-election.

As if the shame that his party heavies brought to the nation across the world was not enough for him, the Osu Castle was additionally handed over to his former bodyguard to train more hooligans.

Thanks to Mr Manasseh Awini’s exposé on these hoodlums, only God can tell where Akufo Addo and his blood tasty monsters would have planted the future of this nation.

Under his much-touted credentials as human rights advocates and press freedom fighter, journalism practises in Ghana today is under serious threat.

Pictures of undercover journalist, Ahmed Suale were circulated by a member of parliament of the Akufo Addo’s party and shortly after, the journalist was assassinated.

It is believed that Mr Manasseh Awini’s life came under severe threat after he exposed the NPP affiliated thugs who were training at the Osu Castle, an annexe seat of government.

Media outlets considered to be very critical of his government have been shut down while machinery has been set in motion to gag the press.

Media practitioners who reasonably pointed out the flaws in the previous administration true constructive and careless criticisms, could not do same today for the fear of their lives.

His nephew, the finance minister, Mr Ken Ofori Atta has been fingered by the Auditor General for allegedly paying monies to cronies for no work done under Akufo Addo.

Due to his love for divide and rule antics, the once attractive University of Education Winneba has now become the centre of chaos and controversy.

His information minister, Mr Kojo Oppong Nkrumah, once a revered journalist, recently told Ghanaians that his government refused to do due diligence before handing over the multi-billion national assets of ECG to PDS, an extension of the NPP.

His narratives could properly be situated in the double-track system where ECG was supposed to take over from PDS, the company that he claimed, has short-changed Ghanaians.

Cocoa roads and other significant infrastructural initiatives started by the previous government have all been abandoned by Nana Addo under the pretext of carrying out an audit.

It is instructive to note that while those projects were either cancelled or suspended in other parts of the country, those in the Ashanti region, which is the stronghold of the government were not cancelled.

In view of these among others, many are now beginning to appreciate why some people in his own party ditched him when he wanted their mandate to lead the party years back.

Remember that some of his closest allies have ever warned that a vote for him as president would represent chaos in this country where they could not sleep, a situation that has manifested.

In a rather highly hallucinated mood, the president jabbed his main opponent of the NDC that he, Mr Mahama was dreaming in his attempt to come back to power.

I found this statement by the number gentleman very funny and whimsical especially when he has failed to deliver the thousands of promises he made to Ghanaians to win their votes.

If he cares to know, the ability of sitting presidents to fight corruption among their people in government rather than paying lip service to the canker is one of the cardinal points on which Ghanaians vote.

If the construction of infrastructural projects such as roads, hospitals, markets and schools were to be the basis for elections tomorrow, most definitely, Akufo Addo would have failed.

It, is, therefore, important for him to stop the incoherent arguments because those were not part of the social contracts that Ghanaians signed with him in 2016.

In 2008, his main message was that the NDC would collapse the NHIS if it was voted but he lost because the NDC defused the propaganda.

It appears from all indications that Nana Addo wants to hinge his campaign message on free SHS and assert that a future NDC government would collapse it and it is also dead on arrival.

Is this the reason Nana Addo is now telling Ghanaians that Mr Mahama is dreaming or perhaps he has found new love in spewing empty jabs?

Under Mahama, the internal security in the country was such that journalists could be critical of the government at any forum but their dear lives would not be threatened.

A dreaming Mahama who had the vision to build the Legon Hospital, Sefwi roads, protected the media and gave them freedom, is better than Nana Addo who is wild awake but has nothing to show

In fact, a dreaming Mahama who started prosecuting his appointees is better than a hallucinating Akufo Addo who has turned himself a clearing agent and clears his corrupt officials.

Let Mr Mahama keep dreaming on his tried and tested vision which saw massive infrastructural development across the country during his tenure.

You have the right to maintain your penchant for violence which was expounded by Nana Kofi Coomson and keep swimming in the pool of corruption.

The country has now become prone to violence and other volatilities creating severe fear and panic among the citizenry and other foreign nationals.

President Nana Akufo Addo, must, therefore, stop hallucinating and stem the institutionalised corruption that is gradually taking over the country

For a dreaming leader with good vision is better than a wild awake president who is gagging the press.