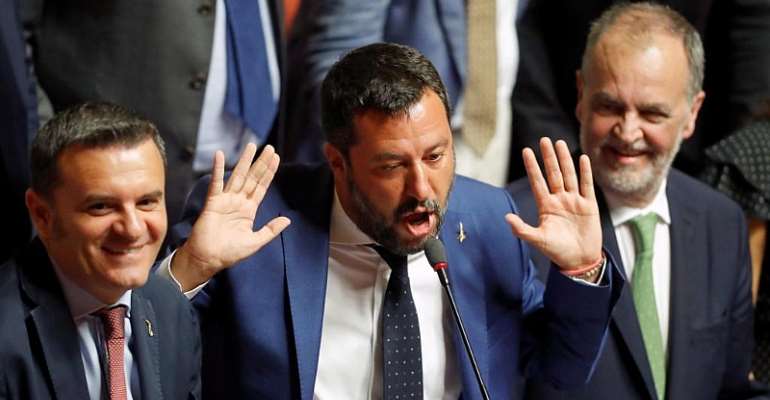 Italy's senate said it will postpone the no-confidence debate until 20 August after a heated session on Tuesday evening.

Italian Deputy Prime Minister Matteo Salvini said he would take on board the 5-Star Movement coalition government proposal to cut members of parliament, but only if snap elections would be called immediately afterwards, he told the upper house on Tuesday.

"We will cut 345 lawmakers and then, for the sake of dignity, honesty and coherence, we will go straight to a vote," said Salvini.

Parliamentary party leaders had met on Tuesday in the Senate to decide when Prime Minister Giuseppe Conte will have to face the vote in parliament, which was requested last week by the leader of the League party, Matteo Salvini, who effectively pulled the plug on an awkward coalition with the Five Star Movement.

The two coalition partners have been at odds on most issues since they joined forces to run the country last year. Salvini, whose popularity has been soaring, wants Italians to go to the polls quickly, possibly as early as October, so that a new government can be created with him at the helm.

"Italy would certainly go into recession. Especially with the trade tensions between the US and China and what's happening with the German economic locomotive," Renzi told reporters, saying that a transitinal government would be more feasible.

For Salvini, polling has already started
Forty-six-year-old Salvini had been touring the country's beaches in what appears to be an electoral campaign already underway. He chatted with his supporters and taking selfies with them in his swimsuit.

On Sunday he visited one of the most exclusive beaches in Taormina and then spoke in Syracuse in the evening, where a group of some 50 opponents voiced their displeasure with Salvini's decision to bring down the current government.

But Salvini is convinced that he is doing the right thing by saying Italians must decide whether he should have “full powers to do what we have promised to do, to the end, without delays”. He has said he plans to meet with the other leaders of centre-right parties, Giorgia Meloni of Fratelli d'Italia and Silvio Berlusconi of Forza Italia.

The leader of the Five Star Movement, Luigi Di Maio, has said this is not the time to be holding a snap elections because Italy has to present its 2020 budget to parliament and the European Commission.

The markets suffered a setback after Salvini called for an early poll.

The League leader said he has a clear budget plan ready and can get down to work on it as soon as the vote is held.

Opposition centre-left leaders are well aware of Salvini's growing popularity but seem unable to create a valid alternative for Italians to vote. Depending on when the confidence vote is scheduled, a dissolution of parliament could be expected by the end of this month.

The ultimate power for this to be done rests with Italy's President Sergio Mattarella.