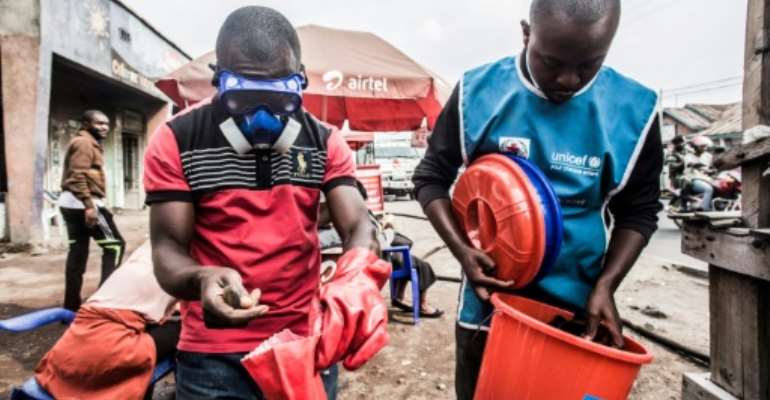 Health checks have been put in place to help stop the epidemic in DRC, the deadliest after more than 11,000 people were killed in Guinea, Sierra Leone and Liberia between 2014-2016. By PAMELA TULIZO (AFP)

Jean-Jacques Muyembe, newly appointed by President Felix Tshisekedi to coordinate the year-long campaign against Ebola, said that out of four confirmed cases in the eastern city of Goma, "two have been cured" after 11 days of treatment.

Expressing his "great joy," Professor Muyembe said, "This is a strong message for us that Ebola is curable. Today, the drugs are there."

On Monday, the US National Institutes of Health (NIH) said two drugs, out of four being tested among Ebola patients in eastern Democratic Republic of Congo, had significantly boosted survival rates.

The two drugs, known by their lab names as REGN-EB3 and mAb114, belong to a class of treatments called monoclonal antibodies, which are designed to bind to the virus and neutralise it.

A total of 681 people had been recruited for the trial, which began in November.

The mortality rate for mAb114 was 34 percent.

The authorities' handling of the outbreak came under severe scrutiny last month when four cases emerged in Goma, a city of two million and a major transport hub.

Muyembe was a veteran of the team that investigated the very first known outbreak of Ebola in what was then Zaire, in 1976. By MATTHIEU ALEXANDRE (AFP)

The World Health Organization (WHO) declared the epidemic a "public health emergency of international concern" -- a move designed to step up the global response.

Tshisekedi also appointed Muyembe, a veteran who was part of the team that investigated the very first known outbreak of Ebola in what was then Zaire, in 1976.

Doctors refused to say which drugs were used to treat the two Goma patients, pointing to the need to respect secrecy in medical trials.

Two other drugs that were also being tested have been excluded from further use in the ongoing epidemic. They also diminished mortality but did not approach similar thresholds of success.

The epidemic in DR Congo is the deadliest on record after more than 11,000 people were killed in Guinea, Sierra Leone and Liberia between 2014-2016.

Out of the four cases in Goma, two were fatalities.

One was a pastor who had gone to the Ebola-hit town of Butembo to preach and returned home with the disease.

The other was a gold miner, who died on August 2.

His wife, Esperance Nabintu, and their one-year-old son have returned home after being successfully treated.

"I thank God," Nabintu, who has nine other children, told journalists.

"I was ill with Ebola, but now I'm cured whereas my husband died of it,.. Ebola exists -- I have felt it in my flesh. It kills but you can be cured swiftly," she said,

"My husband died because he was taken to an ETC (Ebola Treatment Centre) too late," she added.

Goma is capital of North Kivu, a province that has been wracked by militia groups that are the legacy of two wars in eastern DRC.

The epidemic has been concentrated in countryside in North Kivu and neighbouring Ituri province.

But the cases in Goma have stirred deep concern, given the greater difficulty of combatting contagious diseases in cities, where population density and mobility make it harder to trace and isolate people who have been in contact with a patient.

The successful testing of REGN-EB3 and mAb114 will add to a small but growing arsenal of drugs against Ebola.

The authorities have widely deployed a vaccine made by the US giant Merck -- a formula called rVSV-ZEBOV that is unlicensed but has been widely tested for safety -- to protect frontline workers. Nearly 200,000 people have received the jab.

There is also debate as to whether a second prototype vaccine, made by a subsidiary of US company Johnson & Johnson, should be included in this strategy.

TUTAG meets government; conditions of service negotiations b...
12 minutes ago