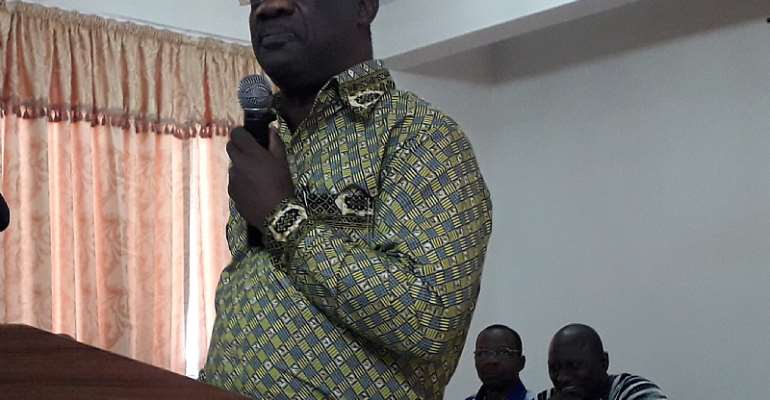 The 2018 annual Gross Domestic Product (GDP) figures released by the Ghana Statistical Service (GSS) indicate that out of the country’s total GDP of GH¢300.5billion, the informal economy is worth some GH¢81.2billion and is growing at 2.6 percent per annum.

The figure, which translates into 27 percent of GDP, means that more than a quarter of economic activities in the country fall outside the tax net. This has reduced the domestic revenue mobilization target of the Authority.

It is on this background that the Ghana Revenue Authority (GRA) held a two-day workshop for members of Private Newspapers Publishers Association of Ghana (PRINPAG) in Koforidua in the Eastern Region on tax issues.

The workshop which is under the theme, “Bringing the Informal Sector into the Tax Net-The Role of the Media” was aimed at galvanising the role of the media as key partners in GRA’s innovative ways to rope the informal sector into the tax net.

“While GRA recognizes the fact that more work is required to be done to improve compliance, it is also incumbent on all income earning persons to contribute their quota to nation building. That is why the Authority believes that collaborations such as this with PRINPAG will inure to the benefit of the national kitty,” the Commissioner-General of GRA Emmanuel Kofi Nti has said.

He continued, “In his desire to wean the country from aid dependence, the President has clearly stated his vision in the 'Ghana Beyond Aid' agenda. This vision however, will elude us as a country if citizens continue to evade the payment of taxes.”

Speaking at the opening ceremony, Mr Kofi Nti said the essence of the workshop is to train the Association members on the various tax issues as well as the challenges and to disseminate same to the Ghanaian public to help change attitudes towards the payment of taxes in the country.

He noted that the attitude of large numbers of income earners in the country to the honouring of their tax obligation leaves so much to be desired especially operators in the informal sector.

Media Role
The GRA boss urges the Association to help in the dissemination of tax information, the need for compliance and benefits of tax payment among others to their readers.

“There is the need for deliberate and sustained efforts on your part as members of the fourth estate of the realm to set the agenda on taxation, thereby creating the required awareness that will complement the Authority's interventions and ultimately bring about attitudinal change with regard to tax issues,” he stressed.

GRA Effort
The GRA boss indicated that his outfit has and continues to come up with various strategies which include simplifying processes and procedures, intensified education and improved service delivery to ensure voluntary compliance.

Mr Nti stressed that over the past two years, the Authority has implemented a number of measures including the full enforcement of the Taxpayer Identification Number (TIN) as a requirement for transacting business with some public institutions; the affixing of excise tax stamp on specified excisable products, the paperless clearance at the ports and the cargo tracking note (CTN) all in our bid to ensure the flow of enough revenue into the national coffers.

“We also employ the use of enforcement actions to complement our educational efforts to mobilise the needed revenue into the national kitty. We have also recently deployed the Integrated Tax Application and Preparation System (iTaPS), an online filing system to simplify the filing of returns,” he stated.

Mr Nti added that other interventions in the pipe-line are the development of an e-payment platform that will enable taxpayers in the informal sector to pay their taxes via mobile money and the Electronic Point of Sales Device to help capture VAT transactions on a real-time basis.

According to him, in April this year, the Authority launched its prosecution policy to prosecute tax defaulters.

“It was also meant to send a message that GRA does not only bark but can also bite hard. I wish to believe that all income earners and recalcitrant taxpayers will take a cue from this and amend their ways,” he emphasised.