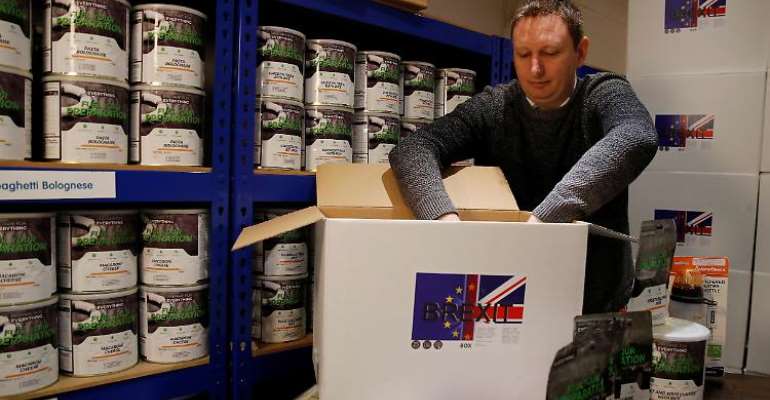 With Boris Johnson at the helm:
Britain's exit from the EU without an agreement, is becoming more and more likely.

If there is a no-deal Brexit, delivery bottlenecks threaten in Great Britain. That's why many British people are already hoarding all sorts of things. According to a survey, every fifth inhabitant builds up stocks.

Concerned about an unregulated Brexit, the British have already stockpiled goods worth four billion British pounds (about 4.3 billion euros), according to a study. Almost one in five had started to stock up on food, drink or medicines, the financial services provider Premium Credit announced in London. For the study 1,052 consumers were asked, who have a job.

According to the survey, those who stockpile mainly buy food (74 percent), followed by pharmaceuticals (50 percent) and beverages (46 percent). In the event of an EU withdrawal without an agreement, many experts expect temporary delivery bottlenecks, triggered primarily by long waiting times for trucks at the borders for customs checks.

Danger of "no deal Brexit" growing
Prime Minister Boris Johnson wants to lead Britain out of the European Union on 31 October - "come what may". He threatens to resign without an agreement if Brussels does not accept his demand for changes to the resignation agreement negotiated with his predecessor Theresa May. But the EU strictly rejects it. This increases the danger of a no-deal break that would damage the economy and many other areas of life.

Many companies are also afraid of delivery bottlenecks. Last week, for example, the British pizza chain Domino's announced that it was increasing its stocks. Around a third of the company's ingredients come from abroad, including tomato sauce and pineapple.