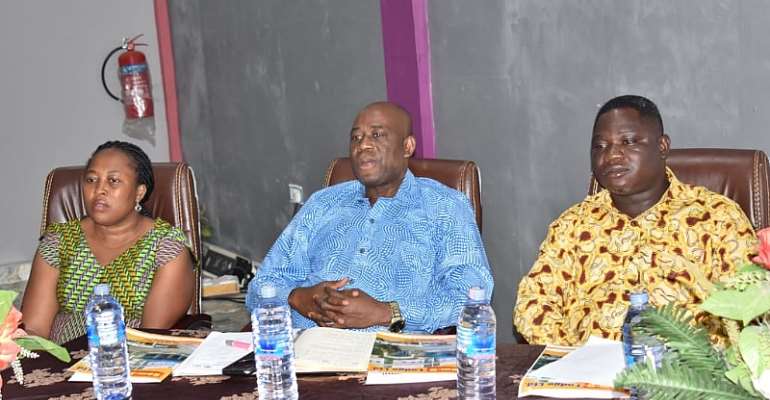 The Ministry of Local Government and Rural Development (MLGRD) has sensitized Municipal and District Assemblies (MDAs) in the Upper West and Savannah Regions on processes leading for the implementation of the Ghana Productive Safety Net Project (GPSNP).

The GPSNP is a successor of the Ghana Social Opportunity Project (GSOP) to strengthen safety net systems to improve the productivity of the poor households in 80 selected districts across the country.

Speaking at the sensitization workshop in Wa on Tuesday, Mr. Kwasi Agyei-Boateng, Deputy Minister for the LGRD, noted that the project would contribute the government’s agenda of economic and social development policy of 2017 to 2024 and creating prosperity and equal opportunity for all.

The Workshop was attended by Municipal and District Chief Executives, District Coordinating Directors and District Planning Officers in the two Regions.

He said the MLGRD commenced the implementation process of the GPSNP in January 2018 in collaboration with the Ministry of Gender and Social Development and with financial support from the World Bank to strengthen and improve social safety nets, productive inclusion of the poor and vulnerable in selected communities.

“The implementation of the GPSNP is consistent with the government’s commitment to strengthen social protection systems and unearth the productive potentials of the poor and the vulnerable”, Mr Agyei-Boateng said.

He indicated that the beneficial districts were selected based on the Ghana Living Standard Survey of 2014 compiled by the Ghana Statistical Service (GSS).

He said 25,000 individuals will benefit through a productive inclusion programme, 30,000 to benefit from the labour intensive public works programme, while 350,000 households would also benefit Livelihood Empowerment Against Poverty (LEAP) cash transfer programme.

The Deputy Minister added that beneficiaries would be selected from the poorest communities and households in the participating districts across the country.

He, however, said there was the need to adopt a localized approach to promoting inclusive development of all parts of the country.

“I wish to call on Ministry of Local Government and Rural Development to make a conscious effort of collaborating with all stakeholders to promote effective and efficient decentralization through grass-root participation, better planning and improved service delivery in local communities”, Mr. Issahaku noted.

Mr. Issahaku reiterated the “need for all stakeholders to contribute their quota to complement government’s efforts in promoting development in the region” and urged the youth to take advantage of the poverty alleviation interventions the being implemented by the government to improve their lot.

JHS Not Increased To Four Years Or Reduced SHS Duration – Na...
13 minutes ago

We've Been Begging To Survive Over Closure Of Our Shops – N...
13 minutes ago