Jomoro NPP executive to demonstrate against MCE over destruction of party 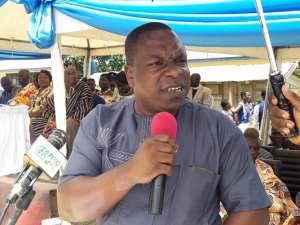 The polling station executive and electoral coordinators of the governing New Patriotic Party (NPP) in the Jomoro constituency of Western Region are to demonstrate against the Municipal Chief Executive (MCE) of the area for destroying the party's electoral fortunes.

This threat follows a statement issued by the Constituency Chairman demanding an immediate removal of the MCE, Hon. Ernest Kofie from office over gross disrespect to the party.

Speaking to newsmen in the Region, the Spokesperson for the polling station executive and electoral coordinators, Patrick Kpolley indicated that they were solidly in support of the decision taken by the Constituency Chairman to remove the MCE from office.

He opined that they were highly disappointed in the bad attitude of the MCE towards the party.

According to him, the MCE was once a Constituency Chairman but has failed to collaborate with the party to improve its fortunes.

For no apparent reason, he claimed the MCE has disassociated himself from activities of the party since assuming office.

"We wish to state that we are highly disappointed in his attitude towards the party as MCE, having occupied the chairmanship position of the party before", he said.

He continued that "He has disregarded the electoral area coordinators on many occasions in our attempt to meet him to discuss issues of importance about the party".

They are, therefore, demanding immediate removal of the MCE from office to save the party from defeat in 2020.

"Our attention has been drawn to a statement released by the constituency chairman (Hon. Simon Amoah) at Ghanaweb requesting the removal of Hon. MCE (Mr Ernest Kofie) from office with immediate effect, because his autocratic style of leadership will send our elephant party in the jomoro constituency into opposition come 2020 general elections", he emphasized.

"In view of this development, we polling station executive and Coordinators across the length and breath of jomoro constituency wish to assure the constituency chairman (Hon. Simon Amoah) and the entire constituency executive of the NPP party that we strongly support any decision they have taken to request the executive in government to remove Hon MCE (Ernest Kofie) from office with immediate effect. Because we should always protect the interest of the party. No party, No party position", he added

Patrick Kpolley disclosed that they had received permit from the police to protest against the MCE on account of his bad conduct against activities of the party.

He said the peaceful demonstration would take place on Wednesday, August 14, 2019 through the principal streets of the Municipal capital, Half Assini from 8am.

He also indicated that they would march to the party's office to finally present their petition to the leadership of the party.

He, therefore seized the opportunity to caution against anybody who would try to misbehave towards the peace of the area.

"We are doing a peaceful demonstration against our incompetent MCE who is destroying our party so I will urge our members to be law abiding. We have received police permit and we are demonstrating", he cautioned.

"We can't continue to work with this MCE, we want him to be sacked immediately to save the party from defeat", he stated.

He said they were expecting over 3,000 NPP faithfuls to join the protest.

He denied rumours going round that the Member of Parliament (MP), Hon. Paul Essien is behind the demonstration against the MCE.

Since 1992, three Chief Executives have been sacked from office without any tangible reason.

In a related development, the Communications Officer of the opposition National Democratic Congress (NDC) in the area, Patrick Ellonu has cautioned against the removal of the MCE adding that the MCE has done nothing wrong to warrant being forced out of office.

He accused the MP (Paul Essien) for the area of working against the MCE to be sacked.

Speaking on Jomoro-based Hope FM morning show, Patrick Ellonu described the MP and NPP Jomoro Constituency Chairman as selfish characters who are enjoying from a 14-billion old Ghana Cedis contract at Half Assini Senior High School where they are building a dormitory for the girls.

He also emphasized that any MCE President Akufo-Addo would nominate if the current one is removed, they NDC Assembly Members will go against that person 100 times.

Since the agitation over his bad conduct and campaign for his removal started, the Municipal Chief Executive for the area, Hon. Ernest Kofie has declined to speak to the media.