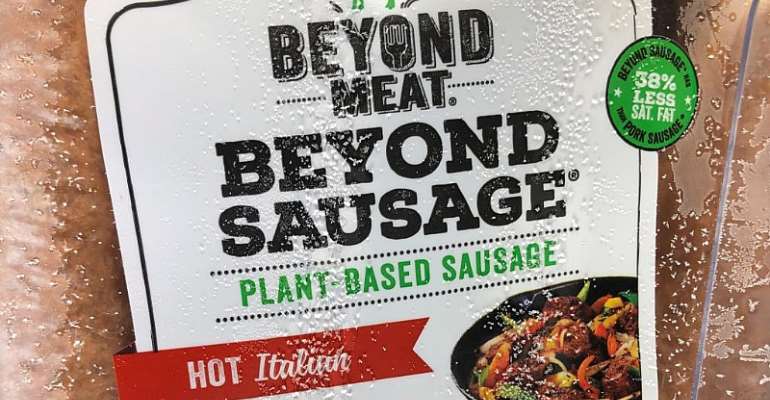 As of 11 October, the network of university restaurants across France will be offering a wider selection of vegetarian options to fit in with the objectives of the 'Green Monday' campaign. The online challenge started by two professors, encourages environmentally friendly behavior by dropping meat and fish from the menu once a week.

Back in January 2019, 'Lundi Vert' or 'Green Monday' launched with the signatures of 500 celebrities, public figures, and organisations.

The goal is to promote awareness on the topic of meat and fish consumption in light of environmental, ethical and health factors by encouraging people to substitute meat or fish with vegetables or other alternatives at least one day a week.

The online campaign has drawn some 25,000 participants who each week receive a reminder message via email with ideas for vegetable-based recipes.

Eight months on, psychology professor and co-creator of the initiative, Laurent Bègue Shankland and economist Nicolas Treich have published an article (in English) in the scientific revue 'Nutrients' (July 2019).

It details their findings based on interaction with the participants who fill in a questionnaire each week confirming if they maintained their 'meatless' Monday challenge or if they didn't, why didn't they manage to substitute meat or fish.

Women more attracted to the campaign
They were able to compile a list of personality traits of those involved in the campaign and then compare them to people in a national comparison sample.

“One month after the beginning of the campaign, 51.2% of the respondents reported they had heard about Green Monday in NC sample, and 10.5% indicated they already had started to apply the Green Monday.”

“Our role is not to propose a vegetarian way of life but to show people it's possible to eat well without meat on the plate.”

“What is interesting in the meatless Monday initiative is it's a very progressive way to change in the right direction and people can at the same time enjoy eating fish and meat and decide to reduce their meat and fish consumption. The idea is that they can decide to target better products and decide to explore new recipes and new ways of eating.”

France is a meat-loving nation
Gaen Plancher, a pyschology lecturer in Lyon is a keen participant of the Green Monday challenge since the beginning of the year.

For her, it was a natural decision that she'd been contemplating for awhile, and the online challenge with weekly reminds was the boost towards action that she needed.

Her time spent abroad on sabbatical in the United States was an eye-opener to the issues surrounding lifestyle choices when it comes to avoiding meat.

“People are more aware of this kind of cause”, she says, explaining that her two young daughters were enrolled in a vegetarian daycare at the time, so it made sense that she would eventually take these ideas on board.

“I admit that I am carnivorous…France is a 'meaty' country, so it was not so natural for me, but it was interesting to realize that I can do it.”

Sometimes, it can be difficult, especially when she finds herself in a restaurant with colleagues, staring at the menu, and that's where she feels the social pressure to continue eating meat and fish.

However, looking at it philosophically, she says, if one week you don't adhere to a green 'Monday' for whatever reason, you can make it a green 'Tuesday' or another day of the week, the goal will still be achieved in the end.

She goes on to say that her awareness as a consumer has broadened thanks to the campaign.

For some people going vegetarian, or trying to, ethical reasons and protesting animal cruelty are behind their decisions, but for Gaen, this was a gradual realization and was not foremost in her mind at the time she started Green Monday.

“What is interesting,” she says, “is that as soon as I started Green Monday, I also started watching some more documentaries about intensive farming and all these things we can read about in the newspaper, and I realized of course it's awful and I have to take care about how I choose my meat.”

Just the beginning
According to Laurent Bègue Shankland, the results of the survey in France will provide important insight for other countries wanting to analyze similar data in terms of personality traits of participants, and behavior patterns.

"This study showed that a personality dimension was an important facilitator to enroll and to sustain the enrollment decision: participants with a higher level of trait Openness signed in more frequently for the Green Monday initiative and put their decision in action during a longer time."

"Such results could inform targeted public health communication campaigns about reducing meat consumption and promoting healthier and more sustainable diets in the public."

"Openness is an expression of an individual's cognitive flexibility, need for variety, and depth of emotional experience,” he explains.

He says the campaign is no way an attack on the meat or fish food industries, rather a pedagogical approach to the general question of consumption, and the power of the consumer to choose, and change their daily habits while being informed about the consequences.

In the future he sees Green Monday becoming a natural part of everyday life, and little by little attitudes will shift and preconceived ideas about eating will change.

Minority Boycotts State Of The Nation Address
49 minutes ago