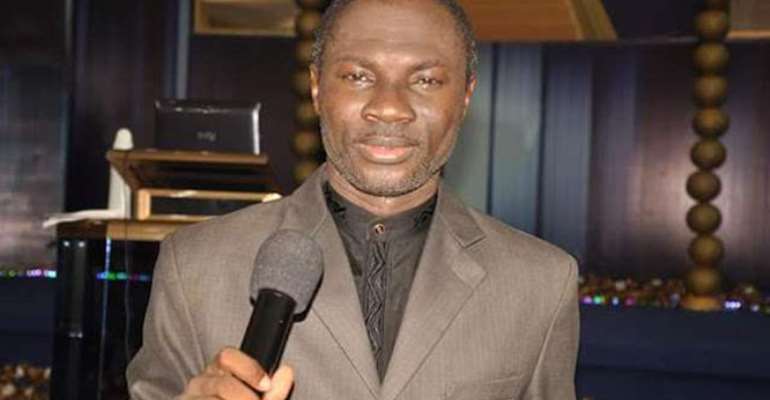 Yesterday morning, that is, on Wednesday, August 7, I nearly got shafted in the rib cage by my wife – actually, it almost landed in my groin area, lol – when she opened the door to our apartment and I, smirk-in-the-face, greeted her with the latest greeting that I recently picked up from the Badu Kobi Facebook “Sermon of Stereotypes” or “Sermon on the Wave,” as I prefer to term it. “Hello, Doormat. How was your night out at work?” You see, I hadn’t quite noticed or, perhaps I should more aptly say, realized in the uncontrollable kick that I have been having from the entire comedic episode for nearly a week, now, that the old lady has been deeply agitated by the scandalous and absolutely senseless and thoughtless ethnic stereotyping that got her former pastor and spiritual leader in trouble with nearly every ethnic group of women in Ghana the other day (See “Demo at Badu Kobi’s Church Over Insults Against Women” Classfmonline.com / Ghanaweb.com 8/5/19).

Anyway, he says that he has done some heavy-lifting research on the profiles and/or characteristics of women from all the various tribes and/or ethnic groups in the country over the years, so he feels confident and assured in the accuracy of his opinions and judgments on this subject. And so, perhaps, instead of virulently charging onto the premises of “Prophet” Emmanuel Badu Kobi’s Glorious Wave International Church, those who vehemently disagree with this One-Man-Thousand Church proprietor would be far better off querying our subject about the source or sources of his research, so the latter could be verified and critically interrogated for clarity; and then, perhaps, a public forum could be established to debate Pastor Badu Kobi on his rather curious ethnic stereotypes. You see, merely calling on the leader-founder or founding-leader of the Glorious Wave International Church, as it is sometimes called, or with the adjective of “International” coming after the noun of “Church,” to promptly and publicly apologize for liberally citing what he claims to have painstakingly researched over an unspecified number of years, flagrantly breaches the accused stereotyper’s inalienable right to academic freedom and, perhaps, also his right to preach and practice what he claims to have meticulously researched and learned in the name of academic freedom.

But, of course, even as I, once again, suggested to my wife and an old flame from our high school days in the 1970s two days ago, if, indeed, the average Ewe woman is a “Doormat,” by the “divine” lights of “Prophet” Badu Kobi’s years of purportedly extensive research on the subject of our discussion, then it, perforce, stands to reason that the Ewe woman’s conjugal counterpart or husband, as the case may be, could be aptly described as either the “Doorway” or even the very “Door” itself. You see, I hadn’t quite immediately realized when the videoclip on which Pastor Badu Kobi’s stereotypical pronouncements were captured first surfaced globally on social media that, in fact, the Ewe woman had greater cause and/or reason to feel outraged and more insulted than either the Asante woman, who had been described as “pathologically” or “incurably” greedy, or the Fanti woman whose main characteristic trait was downright “foolishness.” Or “stupidity,” in the “well-researched” opinion of the stereotyper, or is it “stereotypist”?

On the latter count, we need to be fair to this notorious latter-day political forecaster self-styled as a “Prophet” by taking significant notice of the fact that Mr. Badu Kobi had actually not totally condemned the average Fanti woman to eternal damnation or invariable “stupidity.” I mean, the preacher-man was considerate and, perhaps, even quite realistic enough to also wisely qualify the downright “stupidity” of the Fanti woman with the adverbial qualifier of “sometimes.” Which, of course, somewhat neutralizes or at least considerably mitigates the alleged or purported “stupidity” of the Fanti woman. For, Dear Reader, let’s face the truth: I mean, what tribe, ethnic group or race of women, and men, for that matter, around the world does not possess its own fair share of “stupid” men and/or women, “greedy women” or “doormat” women, and men as well?

Yes, I had not quite realized the fact that the most offensive salvo by Mr. Badu Kobi had actually been lobbed at the Ewe woman rather than at the Asante woman. Perhaps I had arrived at this epiphanic realization because the Mahama-affiliated pastor’s gross and insufferable abuse of Ghanaian women had first been focused on the Asante woman, obviously because the clerically “ordained” abuser was himself of Asante ethnicity. His deeply offensive jab at the Ewe woman only becomes more pointedly clear or poignant, when the rabidly Akufo-Addo-hating preacher veers into the inexcusably abominable territory of observing that it has been only recently that the Ewe woman was brought into what may be aptly termed as “Conjugal Civilization.”

Now, let me add my own equally “well-researched” contribution to the “Badu Kobi Stereotypes,” by observing in passing that a close study and/or critical analysis of the Facebook videoclip on which Pastor Badu Kobi’s scandalous sermon was first posted makes it quite fascinatingly clear that the cultural and social-behavioral concept of “civilization” means quite differently in the Asante version of the Akan language, or, properly speaking, the Asante dialect, than the other dialects of the Akan language. For instance, the expression that the Asante routinely use in describing a “civilized” man or woman is “W’ani Ate” or “N’ani Ate,” which actually means that somebody is a “mischievous” person. Outside of the Asante enclave of “Greater Akanaland/Akanland,” the word “Anite/Anitie” has always meant either a mischief-maker or a mischievous person.

On the other hand, among the rest of the majority of the Akan populace, the word used to refer to a civilized or an “enlightened” person is “Anibuei” or “Anibueye,” that is, “Opened Eyes.” And so, perhaps, there is some truth to some of these ethnic stereotypes, because it cannot be gainsaid that how the vocabulary or the individual words of any language are used and interpreted invariably has something to do with the cultural values of any large group of people and their ethos or morality. Generally speaking, Asantes, most especially Asante men, have been known to have a great sense of Superiority Complex among people of all Ghanaian ethnic groups or subethnic groups. This feeling of relative subethnic superiority inescapably has a lot to do with the historical military might of the Old Asante Empire/Kingdom. For the British colonialists, who were far and away militarily mightier than the Asante, the latter were stereotypically “cunning,” if also “warlike” or inordinately “belligerent.” Now, isn’t that a rather comical a perspective for the British to have of the Asante?

But the fact of whether, indeed, the Ewe woman was the last of Ghanaian women to have entered or been brought into the mainstream of Modern Ghanaian Civilization, would form the main subject of the next installment of this series.

Decision To Let Us Manage Ambulances Laudable--Ambulance Ser...
19 minutes ago