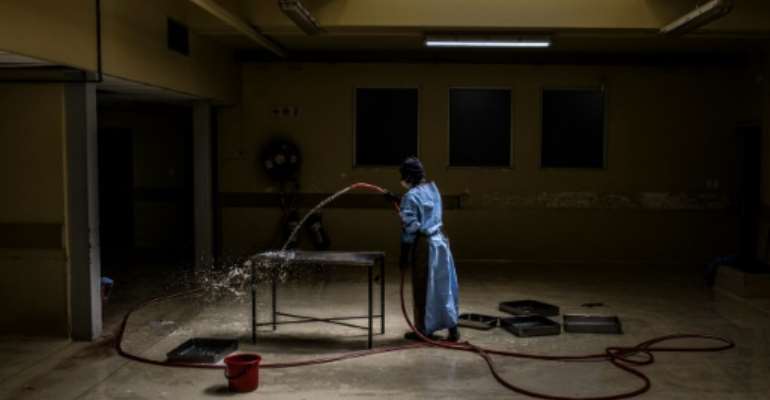 South Africa is feeling the strain from having to deal with hundreds of unidentified cadavers. The most populous province of Gauteng reports an average of 1,000 each year. By GUILLEM SARTORIO (AFP)

They are burying 46 bodies that have been lying in public morgues, unidentified and unclaimed, for up to three months.

It is a task undertaken every month -- the numbers are often higher.

The routine is a sombre reminder of South Africa's perennial failure to identify many corpses.

At the busiest mortuaries in Johannesburg, one in every 10 bodies is unidentified.

As each flimsy coffin is pulled off a refrigerated truck, one undertaker reads aloud an identity number inscribed on top while another ticks off the number on a sheet of paper to confirm it has been buried.

The only other marker on each coffin is a basic description of the body by gender and skin colour, nothing more detailed than "black adult female" or "white male adult" for example.

Without any ceremony, the coffins are hastily put into freshly-dug graves, nine-feet (three-metre) deep, with three or four stacked in each hole.

South Africa is feeling the strain from having to deal with hundreds of unidentified cadavers, with the most populous province of Gauteng reporting an average of 1,000 each year.

"It's incredibly high -- 1,000 people being unidentified in just one province," said professor Jeanine Vellema, head of forensic pathology at Johannesburg's Wits University who is also in charge of Gauteng's 11 public morgues.

Most of the unidentified bodies at the morgues are thought to be undocumented migrants.

Millions of African migrants pour into South Africa, the continent's most advanced economy, in search of greener pastures.

"The facility with the highest percentage is Johannesburg because of the migrant and immigrant population," said Vellema.

A team of volunteer forensic practitioners from the Wits medical school dedicate two days a week to looking for clues to identify the bodies.

At the largest and busiest morgue in Johannesburg's Hillbrow area, they pull out a body from the cold room and place it on a gurney as blood drips on the floor. 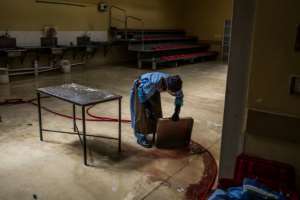 It is wheeled into an examination room for hours of meticulous data collection, piecing together evidence such as fingerprints, dental patterns, tattoos, tribal marks or any distinctive scars.

But for undocumented foreigners, the data is hard to match with any official paperwork.

Despite the challenges, the International Committee of the Red Cross (ICRC) helps South Africa to match data with individuals reported missing from neighbouring countries such as Zimbabwe or Mozambique.

"An unidentified body doesn't really tell us anything about their origin," said Stephen Fonseca, a forensic expert with the ICRC.

"The authorities are overwhelmed... There is only so much space in the mortuary to hold the remains. It's really tough for them to manage these volumes."

About 40 percent of the 16 or so bodies handled at the Hillbrow mortuary a month are positively identified, according to Trisha-Jean Mahon, a forensic practitioner.

"It's a very good success rate. When we initiated our project, we were under the impression that we would probably get none," said Mahon.

Many of the bodies are accident or murder victims, found with no identity or fake identities, in a country with one of the world's highest murder rates, at 57 per day.

No-one knows how many of the millions of migrants in South Africa are illegal or exactly where they hail from.

"It's a massive continent and we work with the authorities to develop very pragmatic ways to link these unidentified bodies to individual families," said Fonseca.

Scientists are also examining ways to distinguish where people come from through chemical "signatures" found in a corpse, possibly linking them to food, drink or air from a specific location.

Far from Johannesburg, deep in South Africa's Mpumalanga province, a Zimbabwean family makes a rare find of a migrant relative -- 58-year-old Sampinya Ndou -- who left home 45 years ago, working as a labourer on a farm.

But two other relatives, who also came to South Africa in the 1970s, are still missing, despite the best efforts of the ICRC.

The two could be among the thousands already buried as paupers.

Ndou's nephew, Samson, who had travelled 700 kilometres (440 miles) from Zimbabwe's southern border village of Dite in search of his long lost relatives, said that he "expected anything... either dead or alive".

The two still missing are Samson's brother and another uncle.

"One can't tell whether they are still alive or not. All that we can do is wait," he said.