Kashmir rally in London as Pakistan warns against nationalism 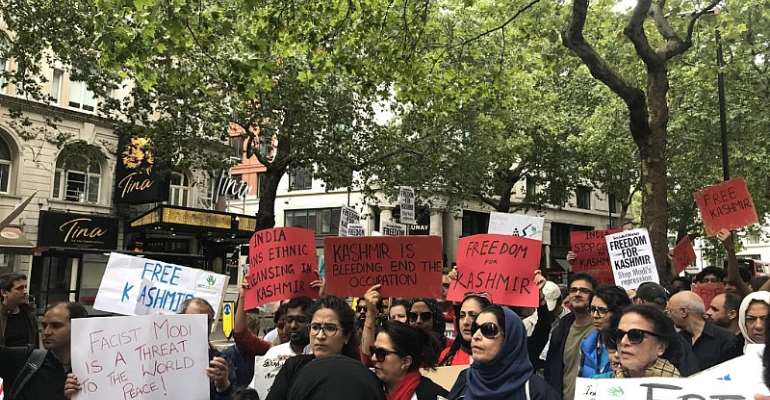 Hundreds of protesters demonstrated in London on Saturday to express their anger at India's controversial decision to withdraw special rights for Muslim-majority Jammu and Kashmir state. The protest comes amid warnings from Pakistan against Hitler-style nationalism.

Protesters gathered outside the Indian embassy on Saturday, carrying signs expressing solidarity with the people of India-administered Kashmir.

Asmaa, who has relatives in the region, held a sign that read 'Restore Article 370'.

"We have not been able to communicate for the past seven days. There are people who are ill; food supplies are low. We do not know if they are alive or dead even, and we are very worried," she told RFI.

On 5 August, the government of Narendra Modi revoked Article 370 of India's constitution, rescinding years of autonomy enjoyed by the Indian-ruled part of Kashmir.

Since the move, mobile phone networks, landlines and internet access have all been cut off.

For protester Bashart Malik, Kashmir feels like "the biggest prison in the world."

"Once communication lines have been reopened, people will be able to express themselves through social media, and the world will be able to get a full picture of what's going on," he told RFI.

The few reports that have emerged portray the city as a warzone.

Security has also been stepped up around important buildings. On Friday, troops broke up a demonstration by 8,000 people against the government's move.

Kashmiri communities in London view none of this positively.

Tumultuous history
"What we are seeing with the military coming in, is the isolation of an entire people. The young will panic and react," commented Adil Siddiqui, who came to show his solidarity with the people of Kashmir.

The fear is that the angrier Kashmiris become, the easier it is for them to be manipulated by radical groups.

Kashmir has been divided between Pakistan and India since independence from the British in 1947.

While the split has been in place for decades, both India and Pakistan still claim the whole region in its entirety, often resulting in a tumultuous history.

Two of the three wars the nuclear-armed neighbours have fought since their independence from British rule were over Kashmir.

At the rally, Bilam Quim, who has family in the Pakistan-administered Kashmir said he was worried the world would turn a blind eye to "India's aggression."

"We have our own issues with Pakistan, however we fear that we could see a return to the violence of the 1990s where hundreds were disappeared," he told RFI.

In a tweet, Khan asked if the world would just stand by as Indian Hindu nationalism spread into Muslim-majority Kashmir, saying it was the same as appeasing Hitler.

Indian Prime Minister Narendra Modi insisted last week the decision to strip Kashmir of its autonomy was necessary for its economic development and also to stop “terrorism.”

He said with Kashmir now fully part of the Indian union, the region would enjoy more jobs and less corruption and red-tape, adding key infrastructure projects would be expedited.

In the short term though, the security crackdown has left residents in Kashmir struggling to celebrate the festival of Eid al-Adha that kicked off on Sunday.

And the fallout from the lockdown risks overshadowing India's Independence Day on 15 August.