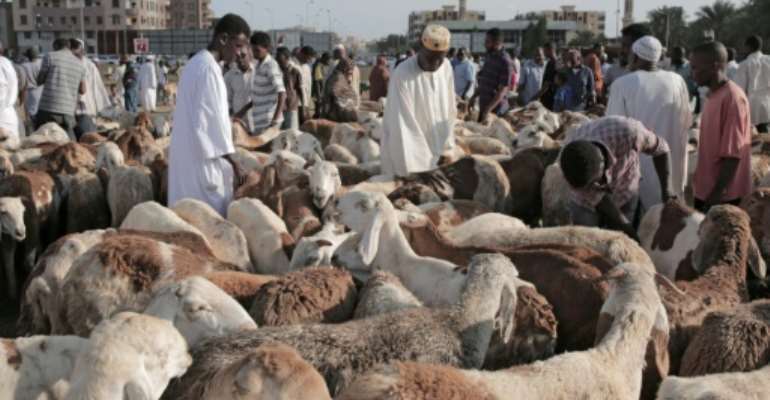 Sudanese Muslims buy livestock at a market in Sudan's capital Khartoum on August 11, 2019, as they mark their first Eid Al-Adha feast without Omar al-Bashir as a ruler. By Jean Marc MOJON (AFP)

As Muslims in Khartoum marked their first Eid al-Adha feast without Omar al-Bashir as a ruler in three decades, the mood was upbeat Sunday but the menu stayed frugal.

In Khartoum markets, the price of a sheep -- a must in the Feast of the Sacrifice which is considered the holiest day in the Muslim calendar -- has doubled since last year.

"You used to be able to find a sheep for 3,500" Sudanese pounds ($60), said Mohamed Abdullahi, a farmer who lives on Tuti, a rural island wedged between the twin cities of Khartoum and Omdurman, where the Blue and White Nile meet.

This year he paid 8,000 pounds, an amount he couldn't really afford even after raising the selling price of the milk from the few cows he rears on a small plot by the riverbank.

"I have three children, I had to bring them something for the feast," the greying 43-year-old said.

In Khartoum's Bori neighbourhood, considered one of the cradles of the protest movement that brought down Bashir earlier this year, an Eid market known for its low prices is witnessing record turnover.

"There's a lack of cash in Sudan at the moment. Here we are using electronic payment cards a lot, to make it easier for the people," said one of the traders, Maki Amir.

"Many people feel happy because of the revolution and the peace that was signed last week, that's why they want a real Eid celebration," he said.

Sudan's economy was sent into a tailspin when the oil-rich south seceded in 2011 and the past eight months of turmoil -- which initially erupted with protests over a tripling of bread prices -- have taken a further toll.

As buyers swarmed the huddled sheep on the dusty open market ground and inspected the animals' teeth, the haggling was sometimes acrimonious. 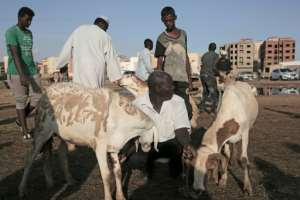 Some men looking to buy a sheep to slaughter blamed traders for taking advantage of the power vacuum to raise their prices.

The traders retorted they were being taxed by the government more than ever before.

Since the last devaluation of the pound in October by the then Sudanese authorities, the currency has plunged by a further 70 percent against the dollar on the black market.

A deal was reached a week ago between the country's generals and protest leaders to transition to civilian rule in just over three years.

The landmark constitutional agreement is to be signed at a ceremony on August 17 but, even if its provisions are implemented, the country remains on the brink of economic collapse.

On the capital's walls, some of the protest murals have already been painted over and its streets were largely empty, many residents having left town to celebrate Eid al-Adha in their villages.

At the market in Bori, Amir Abdullah came to buy a goat for an expatriate friend who wants it donated to charity but he will not be able to afford one for himself this year.

He also said celebrating did not feel like a priority after so many protesters, an estimated 250, were killed in their efforts to take down the military regime.

"Eid is not the same for everybody. Now I'm still in mourning for those who lost their lives," said Abdullah, sweat pearling on his forehead from the afternoon heat.

"Definitely, the situation is getting worse, there is no work, no income and no investment... but we have to stay focused on achieving the goals of the revolution: freedom, peace and justice."