The Ghanaian Star-Cook, Nelson Müller Is Happy About Tönnies's Discriminatory Statement About Africans 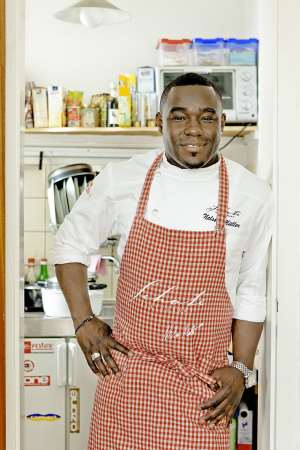 "Don't talk such shit": That's what street passers-by in the German town, Gelsenkirchen, the home of Schalke-04 said about the mild verdict against the Schalke boss, over his disrespectful, sarcastic, invective and discriminatory public utterances.

Meat entrepreneur and Schalke supervisory board chairman Clemens Tönnies recently attracted attention with a statement about Africa. But a Ghanaian TV chef-Cook in Germany, Nelson Müller, says, he is happy about the utterances made by Clemens Tonnies, the Schalke-04 Boss.

According to Nelson Müller, what Clemens Tönnies said about Africans were revealing, I think it's good that these statements have fallen," Nelson Müller, the 40-year-old from Ghana, told the German Press Agency in a statement. Thus, this brings "the thought of many people" to the surface, he lamented.

According to the Ghanaian Star-Cook, Nelson Müller, "We have a constitution. Such statements prove again and again that many simply did not understand it". What I mean is, it seem some people need more knowledge and may be Mr. Tönnies too needs a further education, because someone like him, who is on the privileged side of life, can only profit from this "and move a lot with the new knowledge", says the cook.

It's all about the disgusting statement made about Africans

The Schalke-04 football Club Boss, criticized tax increases in the fight against climate change at the Day of the Trades in Paderborn last week. "Instead, it would be better to finance 20 power plants a year in Africa. Then the Africans would stop felling trees and stop producing children when it's dark," the Schalke supervisory board chairman Clemens Tönnies said.