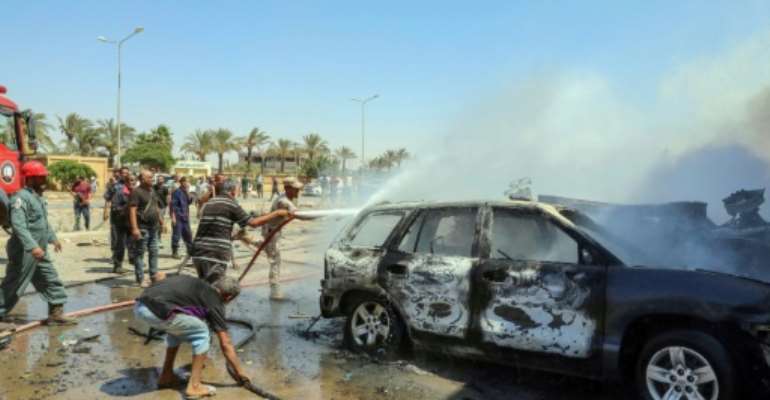 The car bomb in Benghazi went off as a UN convoy was passing through a commercial area, a security official said. By - (AFP)

Forces battling for control of Libya's capital agreed to a truce Saturday, on the eve of the Muslim festival of Eid Al-Adha, but a car bomb killed two UN staff in the eastern city of Benghazi.

Military strongman Khalifa Haftar's forces announced that they would implement a ceasefire, after the unity government conditionally accepted the truce for the three-day holiday which starts Sunday.

Haftar's self-styled Libyan National Army (LNA) has been fighting since early April to seize Tripoli from the UN-recognised Government of National Accord.

The United Nations had called on both sides to commit to a humanitarian truce by midnight on Friday.

Haftar's spokesman Ahmad al-Mesmari on Saturday announced "a halt to all military operations... in the suburbs of Tripoli".

Mesmari said the truce had gone into effect at 3:00 PM (1300 GMT) on Saturday and would last until the same time on Monday afternoon.

The GNA had said late Friday it was keen to "ease the suffering of the citizens and allow rescue workers to accomplish their mission" and would accept "a humanitarian truce for Eid al-Adha".

But it listed several conditions, saying the ceasefire must be observed "in all combat zones, with a cessation of direct and indirect fire and movement of troops".

It also said the truce must include "a ban on flights and reconnaissance overflights" across the country's entire airspace.

The GNA also called on the UN mission in Libya (UNSMIL) to "ensure the implementation of the truce and note any breaches".

Haftar's spokesman said the ceasefire was "out of respect for this occasion's place in our spirits... so that Libyan citizens can celebrate this Eid in peace".

But in Haftar-controlled Benghazi, a car bombing killed two UN staff -- a Libyan and a Fijian -- as a UN convoy passed through a shopping area, a security official said. 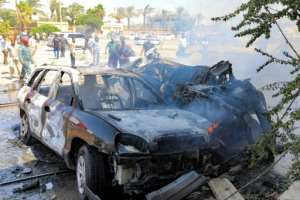 At least eight other people, including a child, were wounded in the attack.

Thick black smoke rose from the area and firefighters rushed to put out the flames that gutted two cars, including a white vehicle like those used by the UN.

No side had claimed responsibility for the attack, and the UN did not immediately comment.

The blast came just months after the UN reopened its offices in Benghazi, which had been closed for security consideration, and less than a month after a car bombing at the funeral of an ex-army commander killed at least four people and wounded more than 30 others.

Haftar's forces have controlled Libya's second city since 2017, when he drove hardline Islamists and jihadists out after a three-year battle.

But Benghazi, the cradle of the NATO-backed 2011 uprising that overthrew and killed dictator Moamer Kadhafi, has seen repeated attacks both before and since.

One attack on the US consulate on September 11, 2012, killed US ambassador Christopher Stevens and three other Americans.

A Libyan lawmaker is also feared to have been abducted by an armed group in the eastern city, the UN and lawmakers said in July.

Haftar, who backs an eastern-based administration that opposes the Tripoli-based unity government, advanced into the country's desert south this year before turning his sights on Tripoli.

Over the past four months, 1,093 people have been killed in the fighting and 5,752 wounded, according to the World Health Organization (WHO), while more than 120,000 people have been displaced.

Forces loyal to the GNA are keeping Haftar's troops at bay on the southern outskirts of the city.

Minority Boycotts State Of The Nation Address
42 minutes ago