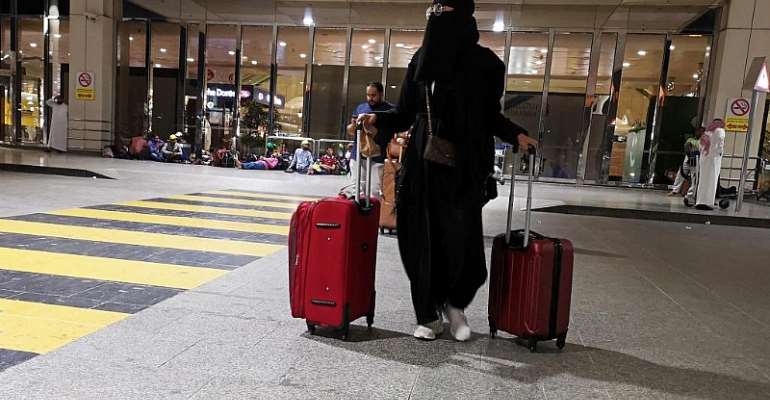 Women are embracing their newfound freedom in Saudi Arabia following a royal decree allowing them to travel without a male guardian. But many are wondering how much longer it will take for the kingdom's system of “guardianship laws" to be abolished completely.

Over a week ago, a decree stamped by Saudi King Salman bin Abdulaziz proved to be the sigh of relief many women were waiting for, and the relief that many have been fighting for: the right to travel freely.

That means the right to obtain a passport and travel abroad.

In the context of the Kingdom of Saudi Arabia (KSA) the move is significant. It means that women can now travel without the permission of their male guardian.

The changes also extend towards a woman's civil status.

This includes "the right to register births, marriage or divorce, as well as get a copy of her family register," explains Maha Akeel, a Saudi journalist and writer based in Jeddah.

This "gives her equal rights to the husband or to any male person in the family,” she adds, saying that women can now be recognized as head of the family.

Guardianship system
To many women outside the country, contemplating such freedom is unheard of as it is part of their daily lives.

Not in Saudi Arabia where a guardianship system governs many aspects of a woman's life.

The underpinning of Saudi Arabia's legal system and social norms is an ultraconservative Islamic ideology widely known as Wahhabism.

Powerful Wahhabi clerics in the kingdom support the imposition of male guardianship based on a verse in the Quran--specifically the 34th verse of chapter 4 entitled 'An-Nisa', or 'The Women' in English--that states men are the protectors and maintainers of women.

Today's decrees, along with that made at the start of 2018 giving women the right to drive, have all worked to improve their situation, but they stop short of abolishing the guardianship system.

“It [current reform] goes far, but. . .of course there still remains some little other changes that need to be addressed” Akeel told RFI.

However, many are hopeful this latest reform will be the catalyst for more to come.

“The guardianship system and the rules that were applied cover many aspects of women's lives, almost everything in her life. So now you have a broad legal coverage that would justify and lead to changing all the other … this [current reform] of course opens the door for that,” adds the Saudi journalist.

Limited impact
While the reforms are being touted as possible 'game-changers' on social media, others are quick to point out that they do not go far enough in making a real difference in women's lives.

“It is not certain that the change will affect those who are in the worst conditions because (...) it is still impossible for women to leave prison without male guardian approval," comments for her part Camelia, the founder of the Swedish-based online movement World Citizens for Saudi Women, who declined to give her full name for security reasons.

"Also women can still be reported to the police for leaving their homes without male guardian permission. These are crimes called 'disobedience or escape'”, she told RFI.

She and others monitor the online platform where women from within and outside Riyadh connect for information and to share their personal stories.

“I personally know women who [have] been imprisoned because of these reasons [disobedience/escape] and these changes do not address these issues at all. So there is also a worry that the changes will not mean a lot to those that are in the worst conditions.”

Camelia adds that the irony of these changes is that if a woman is in a situation whereby her family is very controlling and “you are not allowed to leave the house, you are still going to have to escape from the house to get a passport”.

Another issue is awareness. Saudi journalist Akeel says that while women across the kingdom are becoming increasingly educated --even outnumbering men-- and thus more aware of their role in society, not everyone is aware of their growing rights.

“You do have a segment of women who have been influenced by their community, in particular their male guardian, of thinking that they do not know what is best for them and that the male guardian . . . knows best. So yes, we need more of this education and raising awareness”.

Convincing the hardliners
While many around the world and within the kingdom have applauded the changes, there are those conservatives who believe the system should remain as it is.

“There is a dialogue that is on-going in Saudi society since two or three years ago,” explains Akeel. “There is a continuous dialogue, a continuous debate which is a healthy thing in our society. This was something that was not allowed before. We did not see this kind of active interactive dialogue between all sectors of society,” that takes into consideration the viewpoints of so-called conservatives, she said.

Even the language of the decree, which was published by the official daily newspaper of the Kingdom, 'Um Al-Aura', was noticeable for its gender-neutral tone.

“It was kind of seen as a good sign, to keep things equal and standardized as much as possible,” offers Akeel.

However, others argue that the neutral language was a way to keep the 'conservatives' appeased by minimizing the focus of the equality between women and men.

Activists' release in doubt
One issue that could crop up is the plight of the female activists who fought for the right to drive, and for changes to the guardianship system, who remain in jail.

“Well the issues that they were pushing for has been addressed as you can see, whether it is the driving or the male guardianship, so I think whatever reason they are being held for it has nothing to do with that. It is probably something else, as has been said in official announcements other than that, we don't know,” explains Akeel.

About a dozen women remain in prison, such as Loujain al-Hathoul, or Samar Badawi on charges not directly related to their activism, but for 'attempting to destablise the kingdom' or for simply being 'terrorists'.

Even outside the country, those who have managed to flee are weary about trying to help others.

“I know people are trying to help, but they are also scared to some extent because a lot of exiled Saudis have been threatened by the government or told not to be active on social media or write things critical of the regime,” explains Camelia of the World Citizens for Saudi Women.

The murder of Saudi journalist and critic Jamal Khashoggi continues to serve as a deterrent to other activists.

That being said, the advances are already giving women in Saudi Arabia the proof that they are no longer minors, and can aspire to the same rights as men.