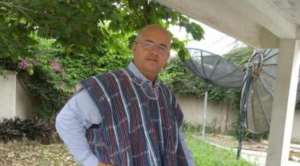 Once again, this week you emerged from the woodwork to poison our already polarized media landscape with an untidy, incoherent, illogical and totally dumb write up-linked to the raging storm-generated around the PDS scandal, which has so badly blighted the image of your government.

For those who missed it, the article is titled “Letter to Martin Amidu: The Manipulation of Jospong at PDS and the pilferage of the saboteurs".

Clearly, this write up was nothing but a weak attempt at militant PR to, as usual, pursue the interest of Fadi’s paymasters (foreign companies) who are desperately scanning Ghana’s business space to snatch the operations of local enterprises and bag our natural resources to their home countries. This is evident in this drunk call Fadi Daboussi’s persistent efforts to pull the hard-earned reputation of Dr. Joseph Siaw Agyepong and his conglomerate he spent days and years to build.

Now, for those who are minded, this article falls squarely in line with the stock in trade of Daboussi. He weaves together conspiracy theories about Ghanaian businesses which he dislikes otherwise how did he manage to draw Dr. Agyepong’s name into this PDS brouhaha?. He publishes them in order to generate dislike for such companies in the public eye. In this process, he then tries to project foreign corporations in order to rundown Ghanaian firms. \

It should be noted that his job description at the Jubilee House is to create space for foreign investors by damaging the reputations of successful local companies, operating in areas which are of interest to the foreigners. That’s a job he has been given to do and I have made this abundantly clear in my previous writings. Indeed, I cautioned the President not to blink an eye on this guy because he is here to destroy him and his government in the interest of the foreigners not us Ghanaians. That is an incontrovertible fact - and nothing more. He has no genuine motivations whatsoever, nothing patriotic.

Even more worrying is that, as part of his modus operandi, Daboussi hides under the President’s name to shower insults and intemperate language on persons he targets including leading members of the New Patriotic Party (NPP). He feels entitled and emboldened to act this foolishly because, he and the President, he would often boast- are old drinking buddies. But H. E Nana Addo Dankwa Akuffo-Addo must be very careful because this guy has done him more damage than good. He makes the public see our president as a drunk and feels he behaves like Daboussi haaa.

David Asare am told resigned a couple of years ago to pursue his personal interest so how can Daboussi bring Agyepong’s name into some body’s private endeavors as far as PDS is concerned?

It is also vital to point out that over the years, Daboussi is not the only “contractor” in this business. Manasseh Azure Awuni has been his long-standing “partner” in the agenda of soiling reputations of personalities and trying to kill local enterprises through malicious publications-and the evidence abounds.

From Statesmen, through entrepreneurs to respected public servants, Fadi Daboussi and Awuni, have cultivated the habit of constantly maligning them with fabricated articles in a manner that is unacceptable to level headed Ghanaians. Even Awuni’s write-ups are sometimes coherent and logical though he does more cut and paste and repetitions but this foreign ignoramus has no idea what he puts out there for readers because he is always under the influence of alcohol.

Former President Mahama ignored him/them on several occasions when they went on a tirade-using language to describe the then sitting President, which I dare not repeat. With the affable JOSPONG Boss Siaw Agyepong-it was something else. Now, Daboussi wants to stir the honest nest by stretching his dirty hands to Mr. Martin Amidu. This clown, ought to be dealt with now and made to answer for these untested theories he spins together.

Reasonable people will say Fadi’s recent publication is nothing more than a VC10 bar talk. Well, likely so.

But also, calm heads at the Jubilee House ought to call him to order, particularly given the disregard and dishonor he treats the name of Mr. President. It cannot be allowed for this scoundrel to justify his disrespect for the Ghanaian on the altar of friendship with the President-never.

In respect of his latest article, why malign Amidu and JOSPONG in one breath and in another, attempt to defend others in respect of the PDS deal-without any factual basis whatsoever. What makes those you defend clean? What proof do you have of complicity or manipulation by JOSPONG? Cut that crap!!

I have always advised you. However, you never listen. One day, this will see you to your end.

The Lord protects those who humble themselves, get that into your ugly red heard.

The writer is an environmental sanitation enthusiast.