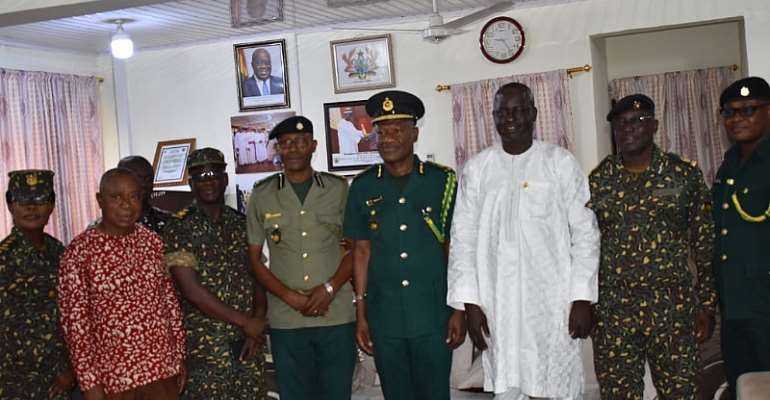 A team from the Headquarters of the Ghana Immigration Service (GIS), led by the Controller-General, Mr Kwame Asuah Takyi, on Tuesday called on the Upper West Regional Minister, Dr Hafiz Bin Salih, during a working visit to the region.

Interacting with the minster and other staff of the Upper West Regional Coordinating Council (RCC), Mr Takyi noted that his visit is to gather first hand information about the condition of work of the GIS personnel in the region and to report same to the sector minister for redress.

He said there is the need to improve security at the various borders as it is a major security concern to the nation, and said there cannot be development without security with the assurance of protecting the borders.

Mr Takyi noted that the service, with support from the Spanish government is to set up Migration Information Centre to curb the challenges of people migrating through the desert to Europe.

Dr Bin Salih, on his part, commended the GIS Boss and his team for taking the initiative to visit the region and said the information and experience gathered from the visit will inform him to appropriately deal with regional commanders.

He however appealed to him to post more officers to the Upper West Region to augment the limited staff in the region and to serve other districts where there were no GIS officers.

The Regional Minister observed that the regional command of the GIS is seriously challenged with inadequate logistics, particularly vehicle, and urged the Controller-General to provide it with vehicles to aid them in their work.

“We appreciate what you people are doing, only a few months ago, some miscreants were trying to come into this country but through the vigilance of your men and other security personnel we were able to forestall that unfortunate situation”, he added.

Dr Bin Salih assured the GIS Boss of the RCC’s readiness to cooperate with his outfit and to provide the necessary support to help make the Upper West Region a better place for all.