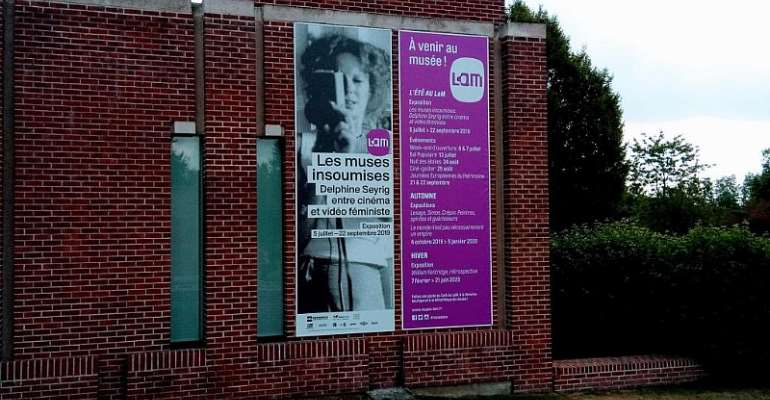 A riveting exhibition called Delphine Seyrig and Les Muses Insoumises, the untamed muses, at the LaM near Lille shows how the actress who starred in Alain Resnais' landmark 1961 Last Year in Marienbad harnessed the power of new video technology and used it as a media weapon.

The 1970s in north west Europe was marked by a renewed feminist thrust. In France, after obtaining the right to vote at the end of World War Two, women and their male supporters continued the fight for further rights and respect.

Traditional societal postures challenged: the right to legal abortion, was achieved in 1975, as well as more sexual freedom.

Post-1968, French women took up the baton
Among them Delphine Seyrig, who became a spokesperson for the movement, but a less familiar name than government minister Simone Veil, lawyer Gisèle Halimi, film maker Agnès Varda or stage and film director Ariane Mnouchkine.

Perhaps it's because Seyrig died in 1990 that she has been somewhat overlooked, because in the archive footage from Switzerland and France she comes across as vociferous and feisty as Myriam Makeba or Vanessa Redgrave or Jane Fonda in their worlds.

The exhibition Delphine Seyrig and Les Muses Insoumises at the Lille Museum of Contemporary Art (LaM) is co-organised with the Reina Sofia Museum in Madrid and the Center Audiovisuel Simone de Beauvoir in Paris.

Much of the information, audiovisual or written, is not common knowledge and requires a certain degree of concentration.

It also shows her time married to avant-garde artist Jack Youngerman, and her experience living in the United States.

Protest videos
Seyrig and the collective called Les Insoumuses she formed with Carole Roussopoulos, and Ioana Wieder made several films using the latest video technology which today are kept in their Centre Audiovisuel Simone de Beauvoir in Paris.

One of them is called Sois Belle et Tais-Toi meaning Be Pretty and Shut Up. It's a documentary film Seyrig shot in 1976.

Seyrig's Sois-Belle et Tais-Toi, consists of interviews with US actresses like Shirley McClaine and Jane Fonda, French actress Maria Schneider and British actress Jenny Agutter. They talk about their sense of what is expected of them by the film industry.

International cause
On film, in photos and documents, the LaM exhibition takes in feminist painter Mary Barnes, the UN Womens' Forum in Nairobi in 1995 and womens' roles in the Israel-Palestine conflict.

The exhibition at the LaM at Villeneuve d'Ascq on the outskirts of Lille puts video into perspective.

It hasn't just killed radio stars, the new technology was a boon for the feminist cause.

The exhibition moves back to Madrid in late September 2019.