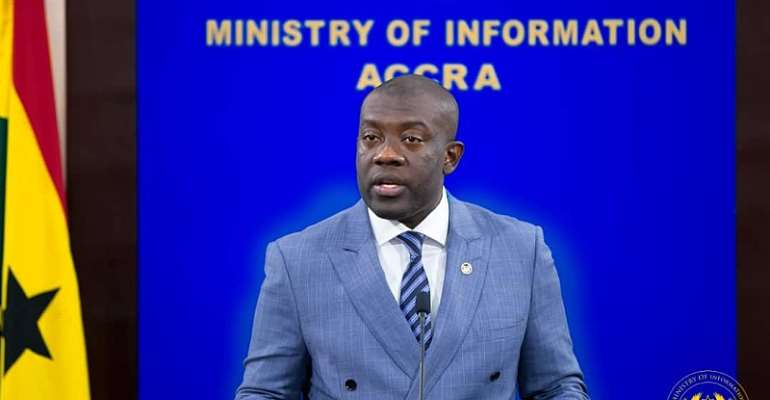 The four Indian businessmen and two Ghanaians who were picked up by National Security officials on Thursday in the Ashanti Regional capital, Kumasi were arrested over their alleged involvement in illegal gold trade.

This is according to Information Minister, Kojo Oppong Nkrumah.

The Ofoase Ayirebi Member of Parliament made this disclosure at a press briefing in Kumasi on Friday.

Responding to a question on the operation, he said his briefing from the national security indicated that the necessary permits were sought before the operation was conducted.

“Those arrests are as a result of a National Security operation which was conducted pursuant to the necessary court permit which was sought for that purpose. It is in connection with some illegal gold-related transactions that these people are suspected to been involved in,” Kojo Oppong-Nkrumah said.

The wife of one of the arrested persons had earlier raised questions about the way the operation was carried out, saying that they were not told where her husband was being kept after he was arrested from their home.

The woman told Citi News that, “we were even thinking they were from BNI, so we went there but they said they did not know anything about it. We went to the police station and they asked us to write our statement, later when we went back to check on the case one of the officers told us that now the media has taken the issue up so they can't work on it. So now, I am pleading with all Ghanaians to help me locate my husband. If indeed they are from National Security they should let us know because bad people are around.”

A security analyst, Col. Festus Aboagye Rtd. also urged the country’s national security body to redefine its approach conducting arrests by ensuring that sufficient information and identification of the officers carrying out the operation are given so criminal elements do not capitalize on the situation to use such means to kidnap people or commit related crimes.

Meanwhile, the Information Minister says the arrested person will be arraigned “at the right time. It is not kidnapping, it is not that people are missing.”