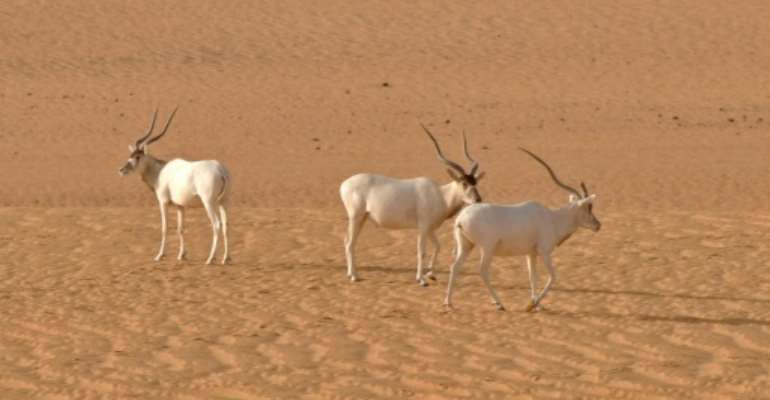 Critically endangered species such as the addax or white antilope could disappear if major changes are made to the Niger national nature reserve. By Thomas Rabeil (AFP/File)

Environmental activists said Friday they have launched a petition to stop the break-up of Niger's Termit and Tin Toumma national nature reserve, the biggest in Africa, to honour an oil deal with China.

The government in Niamey announced in June it had decided to "redraw the boundaries" of the Saharan wildlife park, set up in 2012, to respect a production share contract signed four years earlier with the China National Petroleum Corporation.

The deal gives the CNPC rights in the Agadem oil blocs that fall within the 96,560 square kilometre (37,282 square mile) park.

"The reserve is under a real threat from petroleum exploration by a Chinese firm," Hamadou Soumana Oumarou of the African NGO Jeunes Volontaires pour l'Environnement (Young Volunteers for the Environment) told AFP.

The online petition says "China is destroying biodiversity in Africa".

According to Oumarou, 24,000 signatures have already been collected out of a target of 50,000.

French NGO Noe (Noah), which manages the reserve for the Niger government on a 20-year mandate, said the government move would remove protected status from 45,000 square kilometres of the reserve.

Noe warned last month that critically endangered species such as the addax, or white antilope, would disappear.

CNPC currently operates 21 oil wells within the reserve which is crossed by a 100-kilometre (60-mile) pipeline, according to Noe.

Termit and Tin Toumma spreads over the Agadez, Zinder and Diffa regions and boasts 130 species of birds as well as critically endangered dama gazelle, Saharan cheetah and vulnerable Barbary sheep.