Tunisia: 69 hopefuls want to be next president 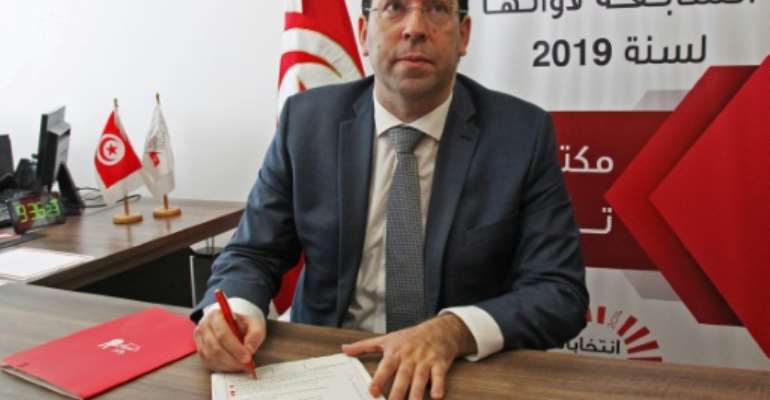 Prime Minister Youssef Chahed is among 69 people who have submitted their candidacy for Tunisia's upcoming presidential elections. By HASNA (AFP)

At least 69 people, including the prime minister, had thrown their hats into the ring to be Tunisia's next president as a deadline loomed Friday.

With the clock ticking down to the official 6:00 pm (1700 GMT) for deadline applications, another 13 people had rushed in their paperwork by midday joining dozens who have already declared their interest, the country's election commission told AFP.

"Political ratatouille," the French-language daily Le Temps dubbed the electoral manoeuvring ahead of the September 15 elections.

Prime Minister Youssef Chahed, who announced on Thursday he would run, presented his application surrounded by supporters, and confirmed he would not resign.

Ennahdha won the first polls held after the 2011 uprising which ousted autocratic president Zine El Abidine Ben Ali, and is currently the largest party in parliament.

Tunisia has been praised as a rare case of democratic transition to emerge from the Arab Spring uprisings.

But it has struggled with repeated jihadist attacks, along with inflation and unemployment that have hit Chahed's popularity

Tunisian former president Moncef Marzouki wants to stand, as well as Defence Minister Abdelkrim Zbidi, 69, who is also vying for a seat in the race after first resigning.

And for the first time in Tunisia's history an openly gay candidate is seeking to be on the ballot. But Mounir Baatour's presidential bid has been denounced by 18 associations which campaign for LGBTIQ rights, who say the controversial lawyer does not represent them.

The election commission will rule on August 31 which candidates have met the criteria to stand, with campaigning due to start on September 2.