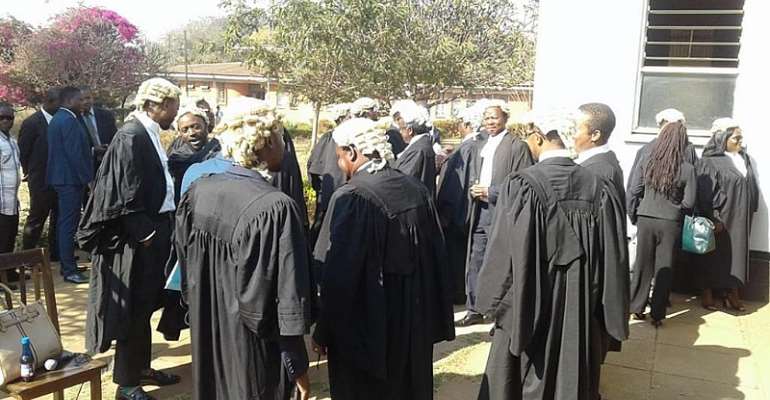 A panel of five High Court judges has opened a 12-day hearing about complaints of gross irregularities which allegedly marred Malawi's May 21 tripartite elections.

The hearing comes after the Malawi Congress Party (MCP), the largest opposition, and the United Transformation Movement (UTM) lodged complaints of alleged fraud in the May 21 election.

TheNation reports that the plaintiffs have hired formidable legal teams to prove that Mutharika “won a fraudulent election”.

Chakwera contends that the process was “fraught with irregularities, including alleged stuffing of ballot papers with pre-marked ballots, tampering with election results sheets through correction fluid and being found in possession of result sheets at home”, writes the Blantyre-based Nation.

Nyasa Times has an extensive account of the trail of looting and destruction left behind by thugs who broke into the Ministry of Information in Lilongwe.

“They swept away all portable computers, removed legs of desks and chairs and made away with anything they could carry including toilet tissues and condoms, Information director Gideon Munthali is quoted as telling the publication.

The protesters are also accused of stripping naked a female police officer in Lilongwe, in an incident which has drawn condemnation from rights activists.

In a move aimed at limiting the scale of destruction, Malawi's Attorney General announced on Wednesday he was seeking an injunction from the High Court to ban the protests.

Kalekeni Kaphale indicated he would petition the Lilongwe-based tribunal to order the Human Rights Defenders Coalition organizing the protests to pay K2 billion as surety to cover damages incurred during demonstrations.

The damage runs into hundreds of millions of dollars in Malawi whose GDP is around six billion dollars”, warns Ephraim Munthali, managing editor of the Nation media group.

“Something like this is going to depress the economy and worsen our poverty level which is about 50 percent of people living below the poverty line”, the Malawian journalist regrets.

The Nation's editor expressed his grave concerns about the Attorney General's intent to ban protests constitutes in a country where the protection of civil liberties is enshrined in the constitution.

“If he get his way, the legislation would constitute a precedent and make Malawi a fertile ground for growing dictatorship”, the respected journalist observes.

“The failure of the protest organizers and security forces to control the criminal elements who have hijacked what should have been peaceful demonstrations is weighing heavily on the minds of Malawians” Ephraim Munthali told RFI.