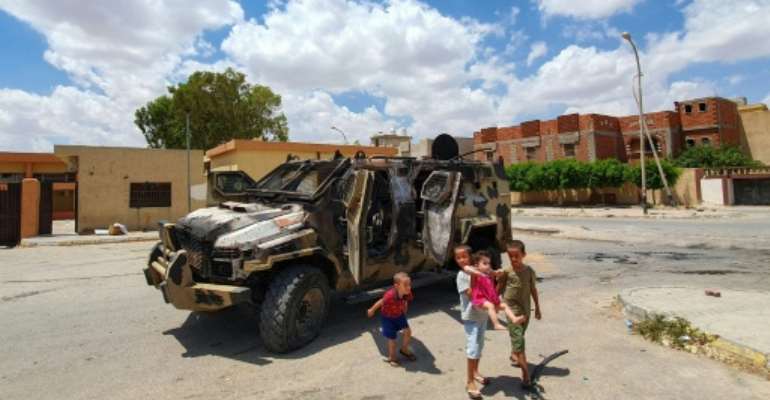 Libyan children play next to a burnt out vehicle belonging to forces loyal to strongman Khalifa Haftar in Gharyan, 100 kilometres (60 miles) southwest of Tripoli, earlier this year; the UN has called for a humanitarian truce. By Mahmud TURKIA (AFP/File)

The United Nations has called on forces loyal to Libya's internationally recognised government and a rival administration to commit to a humanitarian truce by midnight on Friday.

The UN mission in Libya "calls on all parties to accept a humanitarian truce for Eid Al-Adha", it said in a statement on Twitter late Thursday, referring to the Muslim festival of sacrifice that begins on Saturday.

"The mission hopes to receive written agreement from the parties no later than midnight (2200 GMT) on Friday", the statement said.

Strongman Khalifa Haftar's self-styled Libyan National Army launched an offensive against Tripoli -- seat of the Government of National Accord -- in early April.

Over the past four months, 1,093 people have been killed in fighting, according to the World Health Organisation (WHO), with forces loyal to the GNA keeping Haftar's troops at bay on the southern outskirts of the city.

The clashes since early April have wounded 5,752 people and displaced more than 100,000, the WHO says.

Libya has been mired in chaos since a NATO-backed uprising toppled and killed longtime dictator Moamer Kadhafi in 2011.