Ghana Can Be The Best Tourist Attraction Country In Africa If …. 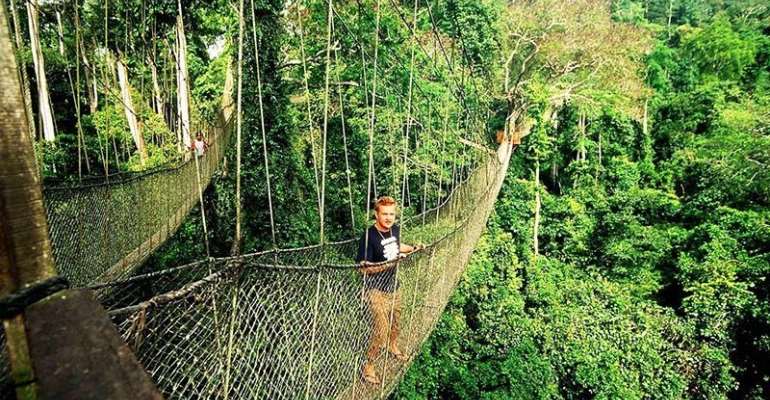 Europeans that visit Kakum National Park speak about it

Tourism is a very important source of revenue for a country's economy, as it brings both money into the state's coffers and directly to service providers.

As a result, the development of this sector can be instrumental in improving existing conditions in one place but has often been emphasized, it is not only an economic factor but much more.

As is well known, tourism can be cultural, sporting, fun, natural, congressional and so on. It can also be further promoted by events, festivals, shows, fairs, etc. In short, there are many reasons for tourism and many ways to promote it.

It is therefore clear that the development of tourism is practically possible everywhere. Starting from an economic point of view, tourism plays an important role in contributing to economic growth, creating jobs, increasing productivity and income.

Furthermore, it is a key point also in the diversification issue, which means the presence of more goods or services produced and offered, thus; it is very important as it allows a country to expand its economy.

For example, if a country lives exclusively on agriculture, it will find itself in enormous difficulty, if due to some reasons such as particularly unfavorable weather conditions, production dropped significantly.

However, if the country also produces other products or services, it would surely be able to survive, despite having received a severe blow.

The surprising growth of tourism in Africa is fifty-eight million international visitors in 2016, more than doubled in twenty years, yet there are other countries which the tourism industry is very poor.

Even though Ghana is a beautiful country, with friendly people and wonderful places, such as the Osu, Cape Coast, and Elmina Castles, Kakum National Park and beautiful beaches, what the country earns in tourism is just a peanut, compared to other high-earned tourist attraction destinations in Africa.

Sometimes, it’s very hard to understand African governments. The environments are dirty, breeding malaria, which kills thousands of both children and adults yearly in Africa, yet the government will not embark on a campaign to clean its environments to reduce the breeding grounds of mosquitoes and to increase tourism.

However, governments purchase expensive malaria vaccines from foreign countries to deal with the situation. This doesn’t make sense at all because our dirty environments still remain a threat.

It is, therefore, likely that Ghana’s earning in tourism will sharply increase if both the Ministries of Environment and the Tourism join hands together to improve the environmental conditions in Ghana.

Travel agencies, tour operators, guides, bar, restaurants, and museums, are all activities related to tourism in Ghana but how clean are our environments? Ghana is already a famous country when it comes to cocoa and gold productions.

Ghana can become the number one tourist attraction nation on the entire African continent if the unhealthy environments and the poor drainage systems in the country are taken into serious consideration.