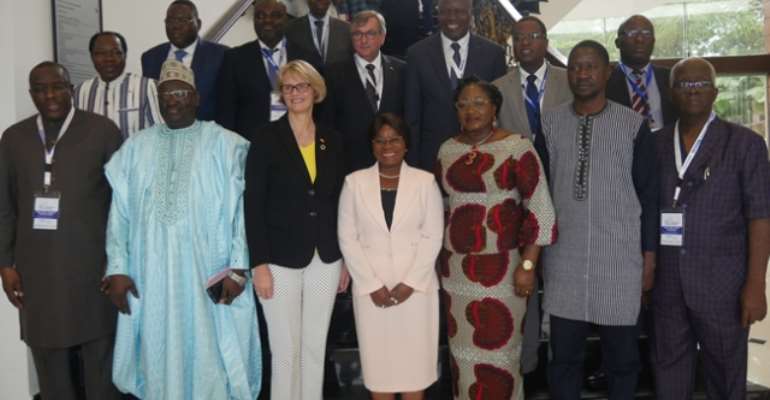 Deputy Minister of the Ministry of Environment, Science, Technology, and Innovation (MESTI) Mrs. Patricia Appiagyei has stressed the need for concerted efforts in the fight against the effects of climate change.

According to her, the fight against climate change which is mainly attributed to man-made activities is not limited to a particular country but rather it cut across borders hence the need for enormous investments to combat it.

Mrs. Patricia Appiagyei is confident that adequate mobilization of financial resources through country contributions will help in this fight as a means of capitalisation for the implementation of programmes in the short and medium-term.

The Minister made this disclosure when she was speaking to this reporter on the sidelines of the Third Ministerial Council meeting of members of the West Africa Science Service Centre on Climate Change and Adapted Land Use (WASCAL) as well as representatives of the ECOWAS Commission here in Accra under the support of the Ministry of Environment Science Technology and Innovation.

"The SDGs are a shared agenda. This means that the level of engagement with varied representatives will determine the extent to which we make progress. It will depend on how well we all ECOWAS, the private sector, the public sector and development partners engage to address our shared vision on Climate Change and Adapted Land Use" she told the reporter.

The Member of Parliament for Asokwa constituency whispered that Government of Ghana had established 192, 253, 19 acres of tree plantation and recently employed over 20,000 youth to plant about 10 million tree seedlings with the aim of reducing global warming.

“We have developed a plastic policy that aims to deal with the whole value chain of plastic management including the circular economy; this will provide huge green job opportunities in recycling and waste to plastic technologies,” she added.

According to 2019 Rural Development Report by International Fund for Agricultural Development (IFAD) dubbed "Creating opportunities for rural youth" it revealed that no country with a large youth population share is expected to be able to avoid significant impacts of climate change by 2050.

The report indicated that Climate change manifests itself in many ways, but its effects are primarily measured in terms of changes in the distribution of rainfall and temperature; while both of these parameters are critically important for agriculture, temperature projections are more stable across a large set of climate models.

"Figures shows that the majority of countries in which young people make up more than 17 per cent of the population are projected to have more than 60 additional days with heat stress in 2050" the report added.

The report further stated that increasing heat stress affects crop and livestock productivity and there is a significant variation in its effects across agroecological systems and regions with substantial negative impacts being expected in temperate and subtropical areas mainly in Africa.

The Regional Gender Coordinator for the international organization (IFAD) Khadidja Nene Doucoure in an interview with this reporter revealed that a comprehensive investment package is needed to address general challenges posed by climate change in Africa.

"The projected impacts of climate change include decreased livestock productivity due to heat stress and changing distributions of pests and diseases; a redistribution of the potential catch of marine fisheries away from tropical countries, which poses the risk of reduced production, income, employment and, hence, food security; and a loss of forest cover, which will both contribute to further climate change and threaten the livelihoods of communities dependent on forest resources" she stressed.

is needed that goes beyond agriculture to ensure productivity, connectivity, and agency for rural youth.

"A comprehensive investment package is needed to address general challenges posed by climate such as investment in agricultural research, water management, marketing infrastructure, investments in irrigation, water-use management, improved soil management as part of a strategy for addressing climate change" she mentioned.

Khadidja points out that some farmer in Senegal is enjoying loan opportunities and irrigation farming machinery's through the support of IFAD in collaboration with the government to eliminate poverty in rural communities in Senegal.

"This situation requires a strong political decision, which in turn requires great solidarity and frank international collaboration" she revealed.