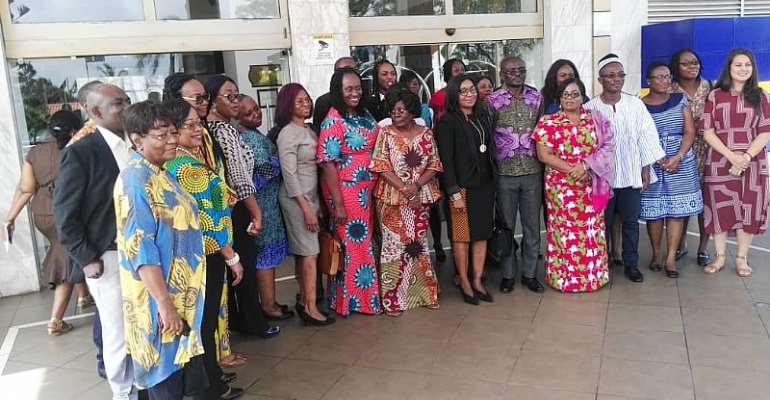 In Ghana, women constitute 51.2% of the population, which implies that without the full participation of more than half of the citizens in the public discourse or decision-making process, it would be difficult for Ghana to achieve sustainable development, according to the UNDP Acting Resident Representative, Rokya Ye Dieng.

The Promotion of Gender Equality and women’s empowerment has been recognized as a catalyst for the achievement of the Sustainable Development of communities, countries and the world at large.

She says despite these efforts, women’s representation and participation at all levels of decision making in Ghana continue to be very low.

"It is obvious that if nothing is done to revert these trends, Ghana would not be able to achieve most targets of the Sustainable Development Goals (SDGs) especially SDG 5 target of 'ensuring women's full and effective participation and equal opportunities for leadership at all levels of decision making in political, economic and public life."

Rokya Ye Dieng was addressing a one-day workshop on the Affirmative Action Bill Advocacy (AAB) and Communication Strategy Planning organised by the UNDP in partnership with the Ministry of Gender, Children and Social Protection and the Canadian High Commission and other stakeholders on Thursday.

Affirmative Action are measures taken by governments or other stakeholders to increase opportunities for an underrepresented group of society.

The workshop brought together about 50 participants from the government, CSOs as well as development partners to help develop an advocacy and communication strategy to facilitate the adoption of the AAB to promote women's participation in decision making at all levels.

The workshop was also meant among other things to galvanise the commitment of stakeholders towards advocating for the passage of the AAB by Parliament.

“For example, there are only 38 women currently in the 275-member Parliament of Ghana, representing 13.8% ranking Ghana the 141st in the world.

She revealed that though it is a slight improvement compared to the previous parliament which had only 10.7%. Additionally, numbers of women elected to District Assemblies continue to decline over the years with 10% in 2006, to 6% in 2010 and 5.4% in 2015.

Women, especially in Africa are still very much at the periphery of political, economic and social decisions and relies most often on decisions made by others regarding their lives.

Ghana is not only signatory to key international and regional instruments including the Sustainable Development Goals in promoting these efforts but have also put in place institutional structures, developed and adopted national laws, policies and frameworks to promote gender equality.

Some countries on the African continent have been successful in using affirmative action policies or laws in increasing women’s participation and representation in public life.

Since 2012, the UNDP has been supporting processes for the adoption of affirmative action legislation in Ghana to address the gender imbalance.

The UNDP has provided support to facilitate stakeholder consultations, provided technical support for the initial drafting of the bill in 2013, and for the review of the draft bill by the Technical Committee among others.