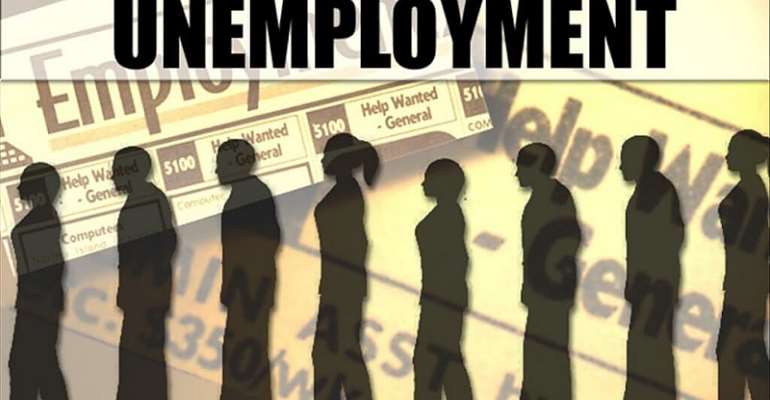 These and many more are the few funny but annoying questions an unemployed young man has to answer everyday of his life until he gets a job. Imagine your mother waking you up from an afternoon nap, only to ask whether you saw the one who took the bucket of water she put at the entrance of the bathroom or your sister asking whether you have seen her panties she hanged on the dryline. This could be so annoying!!! You virtually become the security of the house; the one every one questions, when items can’t be found.

The situation leaves the realm annoyance to humiliation when after answering in the affirmative, you are told " whilst your mates are fending for their families, you are here eating everything you see...I wonder if taking you to school was the best option I could use my money for".

As if the "internal" humiliation is not enough, you go outside for fresh air and outsiders too are tearing you up with this same topic. The slightest provocation, people are quick to remind you that you aren't working :")ny3 nk)p3 adwuma bi ny3" becomes the answer to almost everything you say. If you don't want to be hearing this, it's then better to stay away from any form of argument or social activities.

Have you ever been tired of sleeping? If you haven’t before, ask the unemployed how it feels: You sleep with the hope that you will wake up to meet people back from work; only to wake up around 1 pm, when the sun is at its peak. Unemployment is a serious headache I pray no human suffers. The embarrassment, frustration and humiliation people put you through are so disheartening heartbreaking. At some point in time, you are forced to choose between "indoor or outdoor" humiliation. The interesting part about this, however, is that regardless of the effort you are putting in to get a job, people see you as either lazy or selective. Yes! Even some of your friends, who were at some point unemployed like you, begin to see you in a "certain way", when you stay unemployed for sometime. If you are fortunate to have friends who support you, it gets to a time that you can't run to them for help again...oh yeah! When you have even been invited for interview, no one is ready to give you T&T because according to your financiers, you have taken and "wasted" so much money on interviews, with no result to show. When you stay unemployed for long time, you begin to lose confidence and doubt your capabilities. If care is not taken, you become bitter such that instead of being happy for others, you ask questions as to why you weren’t the one that got the job but them. Unemployment in itself is a trauma and comes along with so much pressure for any individual. It is something no one should wish for a fellow human being; not even an eternal enemy.

Notwithstanding the mental pressure you are personally going through, society compounds it by exerting additional pressure on you. As if the trauma you experiencing is not enough, if you are living in part of the world like mine, whereas a man, it's a crime to be a bachelor after twenty-five years; regardless of how much is in your account, whiles you are thinking of where to get your next meal, the old lady sitting somewhere is also asking when you are bringing her daughter-in-law and grandchildren. At some point, the disrespect and disregard become so much that you are tempted to change your environment to any other place aside where you reside currently. There is so much disrespect from neighbors, some friends, and even your own family. It gets to a level that you begin to lose the little respect you had from your girlfriend and her family as well. You then become a "suggestion box" because people think you don't even know what is good for you. When you try to explain things to make them understand, you are seen as giving excuses, and gradually, your rights begin to diminish.

The frustration and humiliation become so much that you are tempted to move to a new place, without knowing exactly how you are going to survive there. The situation becomes so depressing that at some point if care is not taken, you may accept anything that is thrown at you.

In an attempt to get the love that is deprived of them, many join groups, societies, and organizations that they later wish they never joined. Many people are behind bars for various reasons all due to their inability to take this pressure anymore. Many have lost their lives because they wanted to prove to society that they are better than how and what they see them to be. To prove that they are men like their mates, many guys have committed crimes that they never thought they could commit. Not to be seen as lazy, many have accepted offers without due diligence, and as we speak, can't come out of such organizations; because doing so can be equated to death. Some innocently joined groups with the mind of playing cards to while away time but unknowingly and gradually became drug addicts. A lot of guys have become professional gay prostitutes, not because they wanted to but as to how they got there, they themselves cannot tell...All because of unemployment! A lot of the social vices we are experiencing as a country are as result of unemployment. It is therefore not surprising that unemployment is seen as a security issue. But per experience, unemployment itself is not the problem but the societal pressure that comes with it is what makes unemployment dangerous. Many of these deaths could have been avoided, and the social vices reduced had society shown love and patience to these unemployed guys.

If you are one of those people who disrespect any unemployed person, kindly stop! If you look down on these guys and put pressure on them, kindly refrain from it because you don't need the job desperately than these guys do. The pressure they wake up to every morning is so much…It's not easy for them! The weight these guys carry is too much for you to add yours! None of them wishes to stay home and be treated like a child if they had their own way. None of them went to school with the mind of staying home and "stealing" food and coins. Dear parents, all of these young guys want to work and make you proud so if things are not going as planned, please have patience for us.

A Word of Hope

And Dear unemployed guys, if things are not going as planned, don't give up! Resorting to crime and drugs isn't the solution...No! When they throw insults at you, don't bow your head in shame, rather walk with pride because you are doing your best. Keep on fighting! Don't be dejected when you are rejected; persevere and stay focused until you are eventually accepted. It’s just a matter of time!!!