British student was 'depressed' before jumping from plane: Madagascar police 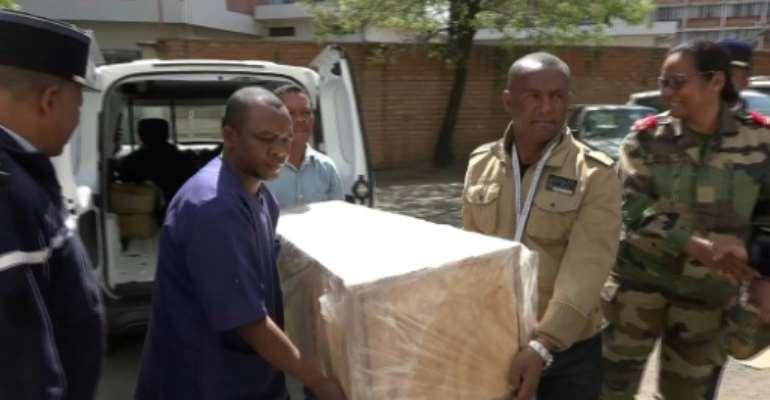 The coffin containing the remains of British Cambridge University student Alana Cutland was carried out from the morgue. By Volana RAZAFIMANANTSOA (AFP)

A British student in Madagascar who apparently jumped from a plane after opening the aircraft's door mid-air was "depressed" and disappointed by her studies, the African island police said Thursday.

Cambridge University student Alana Cutland, 19, who was on a research trip, fell from a light aircraft shortly after it took off from an airport in remote northwestern Madagascar last month.

Her body was found by villagers on Tuesday in the Mahadrodroka forest, and transported to the capital Antananarivo on Thursday.

The chief investigator told AFP they found anti-malarial pills in her bag, but only two were taken, although it is unclear when exactly she took those.

Some sleeping pills were also found in her hotel room.

"We found in her bag, a box of anti-malaria medication and we were told that she also had sleeping pills on the table in her hotel room," the lead investigator Spinola Edvin Nomenjanahary told AFP by phone.

He said she had mumbled during a phone call with her parents who then suggested she return home.

"The parents had difficulties recognising their daughter during their last phone conversation and had asked her to take the same flight as Mrs Ruth Johnson, a British woman who was staying at the same hotel as her," said Nomenjanahary.

"Before leaving, on July 25th, (Johnson) went looking for her in her room, and found Alana, sitting on a chair, looking lost and staring into space," added Nomenjanahary.

Cutland's uncle previously said she had become ill during her trip, possibly due to prescription medication, according to British newspaper reports.

Another investigator, Colonel D'y La Paix Ralaivaonary, told reporters that the natural sciences student was studying crabs and "she became depressed" apparently after she concluded her research may not succeed.

She also contacted her supervisor, according to police.

She was "disappointed" when her parents asked her to drop the research and return to London, he said.

Around five minutes into the flight, which took off from a small airport at Anjajavy to the capital Antananarivo, she apparently opened the plane door and jumped.

The pilot and Johnson, who was a passenger on the flight, say they tried in vain to stop her.

"She jumped, no one pushed her," said Ralaivaonary.

Anjajavy villagers only found her body two weeks after the incident.

The student was supposed to have stayed 45 days in Anjajavy but quit after 10 days.

In a statement issued through the Foreign and Commonwealth Office, the family described her as "a bright, independent young woman".

"She was particularly excited to be embarking on the next stage of her education, on an internship in Madagascar complementing her studies in natural sciences," it said.

"Her thirst for discovering more of the world always ensured she made the most of every second of her action-packed young life."