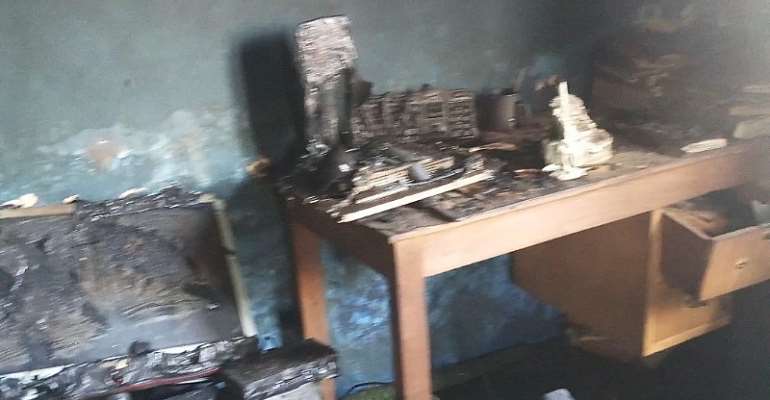 A 28-year-old man has met his untimely death after he was consumed in a raging fire at Dokutsekope a suburb of Kasoa in the Awutu Senya East Municipality of Central Region.

According to an eyewitness, 28-year-old Emmanuel, popularly known by his peers as “Awaga,” was burnt beyond recognition.

“I heard a loud noise from his room at around 4:30 am so I rushed to his room but unfortunately the fire had consumed the entire room so I could not enter,” the eyewitness said.

Speaking to Citi News in an interview, DO II Isaac Saah of the Weija Fire Service indicated that they had a distress call from a resident in Dokutsekope of an outbreak of fire and rushed to the scene.

According to the Fire Officer, when personnel from the Fire Service got to the scene, residents had managed to bring the fire down.

“We had a lot of difficulties in getting to the location on time as a result of illegal structures that have been built on footpaths,” Mr. Saah said.

He urged the Awutu Senya East Municipal Assembly to enforce laws that would prohibit the building of illegal structures to make it easily accessible in times of emergency.

Zonal NADMO Officer for Ngleshie Amamfrom, Simon Norgbedzi in an interview said an assessment will be conducted to ascertain the cause of the fire.

He explained that a lot of illegal connections in the area might have caused the accident.

“I think the ECG must come and have a look at Dokutsekope since there are too many illegal connections in the area and it is dangerous,” the NADMO Officer said.