In which... Denis Lavant talks about Alverson's 'The Mountain', Lav Diaz about 'The Halt' 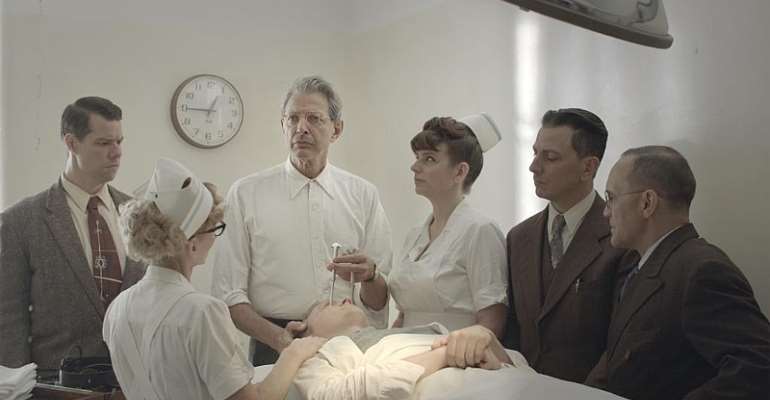 In July's Cinefile Rosslyn Hyams speaks to leading French actor Denis Lavant, and a Philippines film director, the prolific and multi-talented Lav Diaz. Click on the arrow on the photo above to listen to the interviews. Or subscribe to Cinefile.

The Mountain
Also known as a psychosurgical odyssey, The Mountain was released in the US in July on the heels of it's French première at the Champs-Elysées Film Festival.

The Mountain has a serious track record, featuring in the Venice Film Festival 2018 followed by Sundance in 2019.

US director Rick Alverson's 5th feature is on the surface about the practice of lobotomy, invented by a real-life doctor called Walter Freeman in America in the 1950s. Jeff Goldblum and Tye Sheridan play respectively lobotomiser Dr Wallace Fiennes and his would-be lobotimised photo assistant, Andy.

Of course, that's the top layer. Its slow pace, lacklustre palette and trunkated, creepy dialogue, potentially lull the viewer into a mindless state. However, if you seek, you may find issues about today's America, or about many parts of the world today. Alverson puts a lot of thought into this film.

The Mountain is a mind-game, where the mostly eery calm of the cajoling or passive characters is blown apart by French actor Denis Lavant. He plays French single-father Jack, who wants lobotomy-mad Dr Fiennes to operate on his teenage daughter, the object of Andy's first love.

Lavant is known for his energy and seemingly unbridled action on stage, as well as on screen. His ability to slip into the skin of arresting characters out of a Tolkien novel or a Shakespeare play or from a French equivalent of East Enders, makes him any director's dream, but he selects carefully.

"Jack is already a bit schizo to begin with. I don't need to analyse this character to be able to play him. I just have to act the character if you like. Rick Alverson is great and really knows how to direct actors. He suggests plenty of imaginative ideas."

Listen to Cinefile podcast to hear more about Denis Lavant's take on The Mountain.

Ang Hupa -The Halt
The four-hour-40 minute long film is largely dark and once again deals with Lav Diaz' main concerns, the politics and sociology of his country, the Philippines.

Set in 2034, when the volcanic action has put out the light, a raving, deluded dictator (Joel Lamangan) is manipulated puppet-style by two women security chiefs (Hazel Orencio and Mara Lopez). Their ambition and love of power drives the plot while their passions are inflamed by a love-triangle involving a teacher with a quest and a part-time escort job (Shaina Magdayao).

The man to follow is the enigmatic Hook Torollo played by Piolo Pascual. He realises that he will achieve greater fulfillment from helping street children than firing rocket-propelled grenades or the like.

Philippines director, writer, producer, composer, editor Lav Diaz could of course say much the same in a shorter time, but he maintains that this would zap his propos. Not just a whim, and far from detracting from the story-telling, the slow pace adds fluidity to Anga Hupa -The Halt, allowing the film to sink in.

"I want to work more on spaces, so you can actually touch the thing, a corporal experience with the medium. The so-called audience must also be engaged, not just entertained... rather than being subordinated to the action of Tom Cruise. I want you to see the ants and the birds and the wind."

Première at Cannes
Lav Diaz', Ang Hupa or The Halt in English premièred at the Cannes Director's Fortnight in May 2019, it also screened at Poland's New Horizons and the Jerusalem Film Festival.

Listen to the Cinefile podcast or by clicking on the arrow on the photo above to hear Lav Diaz talking about the dictatorship, street children, homosexuality on film, and why there are a few glimmers of light in his literally dark films.