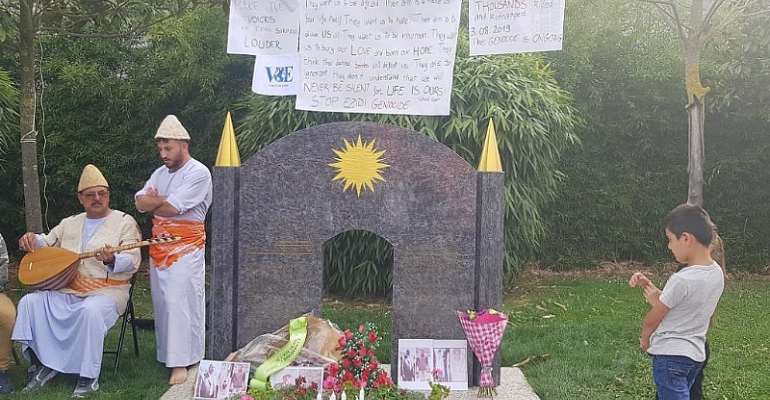 Yazidis gathered in the north of Paris to commemorate the genocide which began on 3 August 2014. The survivors and their children are refugees in France. They all have a vivid memory of that day when they left a part of themselves in the Sinjar mountains.

The laughter and shouts of children playing on the narrow stretch of green grass liven up the Nelson Mandela Sports Centre in Sarcelles. They are playing next to the only monument in France commemorating the beginning of the Yazidi genocide on 3 August 2014. The town of Sarcelles, north of Paris, inaugurated the memorial on 22 May 2019.

Not far away, there are two other monuments commemorating the Armenian and Assyrian genocides. The Yazidi children are blissfully unaware of the sombre occasion; the adults have gathered to remember the beginning of the Yazidi genocide which took place in Sinjar region in north eastern Iraq.

Thousands were killed by the Islamic State armed group who regarded the Yazidis as heretics. The women were raped and enslaved. The boys were enrolled as child soldiers. Those who refused to convert to Islam were executed.

The Yazidis, or Ezidis, have their own language and culture. Their centuries-old religion is among the oldest monotheistic pre-Abrahamic faith.

Raising awareness
Farhad Shamo-Roto organised the event in Sarcelles. He is the president of Voice of Ezidis, an association he recently created to raise awareness about his people, compile information about the genocide and provide help to the Yazidis living in refugee camps in Iraq.

25-year-old Shamo-Roto came to France on 4 November 2017 and was later granted refugee status. He believes remembrance is important, however painful it may be.

“On this day, the Yazidi families, each with a horrific story, want to be together and it's important that our children and the next generation understand what happened to us,” he explains.

“We also want to show the Ezidi people living in tragic conditions in Iraq that we are remembering you and our heart is bleeding at every moment.”

Walking to the Sinjar mountains
Shamo-Roto was a 20-year-old biology student in 2014. He was in his home-town of Guhbal in Sinjar region when ISIS started closing in, blocking all the routes to the small town.

“It was one of the hardest few hours in my life. With my family and relatives, we fled Guhbal on 3 August 2014, after midnight. We walked 20 kilometres to reach the mountains,” he remembers.

“We knew the terrorists were coming to kill us. We knew they intended to kidnap our daughters. I had one cousin and two sisters. Our lives were not important. We were just trying to save them because we knew that the ISIS fighters were going to turn the girls into sexual slaves,” he added.

A 24-year-old Yazidi girl, who spoke to RFI under conditions of anonymity, said 3 August brings back very painful memories.

“This day is like hell for me. It hurts so much,” she says with eyes red from crying. “The past is past but I did not forget and I will not forget.”

“Normally, I smile and look happy because I have to be strong for my family and the people around me,” she adds.

From Kocho to Paris
Samson Husein is a 43-year-old mother from the village of Kocho in Sinjar region. Her husband and three sons were taken by ISIS. She doesn't know if they are still alive.

She came to France in December 2018 as part of a resettlement programme set up by French President Emmanuel Macron with the support of 2018 Nobel Peace Laureate Nadia Murad, a female survivor of ISIS. This programme aims to provide protection to 100 vulnerable Yazidi women and their children, victims of ISIS.

Samson Husein is now living in France as a refugee with one son and two daughters. She does not think she could ever get rid of her immense sadness.

“This month is the most difficult time in my life. I lost everything. I lost my mother, my husband, five of my brothers. I lost 74 members of my family. They were taken from Kocho,” she says.

“The only thing I want to do, is go back to Iraq, to carry out the rituals on the bones of my relatives. That's all I have left of them. And I have not even been able to do that.

“The United Nations will now open the mass graves in Iraq, I hope to go. Maybe I could identify some of them.”

Slowly realising it is a genocide
Diler Alhamad was 22 years old when he fled the small town of Telqassab at 7:15 AM on 3 August 2014 in the car with his family.

“When the sun rose, the ISIS snippers started shooting at us. The Kurdish troops already withdrew from the area. The elderly, the sick and the handicapped couldn't run away, so they stayed [behind]. When ISIS arrived in Telqassab, some of them converted to Islam. Some of them refused. ISIS collected them, poured gasoline [on them] and burned them,” Alhamad recollects.

Alhamad said that the “most horrible moment” for him was when, after he came down from hiding in the mountains, it dawned on him that the killings of Yazidis were carefully planned.

He says that he often wonders why he is still alive when his friends died in the massacre.

“Did the Gods want to torture me all my life, I asked myself. After some time I said no. Maybe I survived and I am alive to become the voice and witness of what happened. For me now, I have to speak. It is like a duty,” he declares.

Alhamad is convinced that most of the Yazidi who survived the genocide wished they were in the mass graves.

He came to France on 10 August 2016 with his parents and a sister. They now live in the town of Soissons as refugees. Another sister, who is now a refugee in Germany, was formerly taken by ISIS.

“When your sister is in captivity and she is just two kilometers away from you. And you know how ISIS will treat her, rape her, use her like a slave. And you can't do anything. So, why are you living? I, there, I lost my dignity, I lost my respect,” he declares.

Alhamad added that neither his father nor himself thought that the international community would have abandoned them.

“Europe, the United States, Canada, Australia, we never thought they will leave us,” he says.

Farhad Shamo-Roto echoes his sentiment: “Unfortunately, the international community is still silent and did not start any step on the ground to help the Ezidi community and build a safe environment for them.”