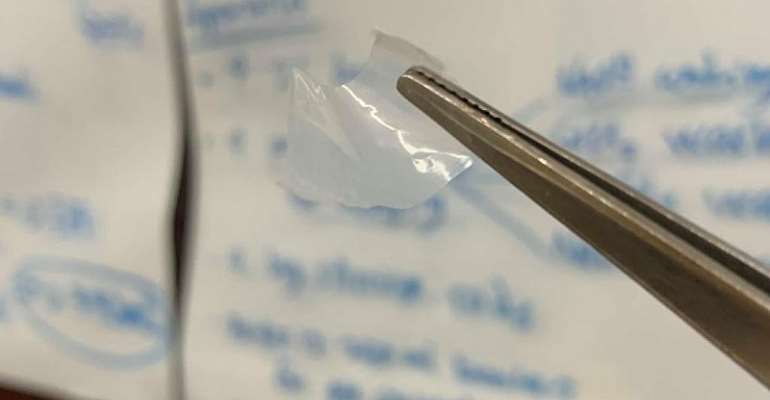 Photos of birds' necks blocked with plastic, whales' stomachs packed with grocery bags, turtles with plastic straws protruding from their noses; these images have become synonymous with our consumption of single-use plastic. To change this, one young scientist has found an environmentally friendly option that uses mango peels and seaweed.

It's bio-plastic. And it's made from sustainable ingredients that are in abundance in his home country of the Philippines.

23 year old Denxybel Montinola created the product at the Institute of Biological Chemistry at the Academia Sinica in Taiwan as a research intern.

More to mangoes than meets the eye
“Theoretically you can make bioplastic made from plants. But the problem of bioplastic is that it's rare you can get the raw materials, or it is sustainable” explained Montinola to RFI.

That's why he looked at what's sustainable in the Philippines: mango peels.

He had seen an earlier version of bio-plastic from Indonesia that is entirely based on seaweed. But looking at his own country, he opted to recreate the product but using material already in abundance.

The Philippines ranks ninth in the top major mango producing countries in the world with a total volume of production at 825,676 metric tons, says the UN's Food and Agriculture Organization, the FAO.

And according to a 2014 report by the Philippine Center for Postharvest Development and Mechanization “Mango is the country's national fruit and is considered as one of the finest in the world…large volume of wastes are produced in mango processing plants which can be utilized for production of valuable product like pectin.”

The added bonus is that the plastic completely dissolves in water without producing any toxic residues.

“I've engineered the bioplastic so it doesn't have toxic chemicals when it dissolves in the water because all of the materials are completely organic” adds the young scientist.

But he also wants to improve the quality of his current bioplastic, since in its current state, it easily dissolves.

“I want to prolong the life span of this bioplastic, for example [by] a week or a month” rather than having it dissolve ten minutes later after throwing out the bag.

And how does it feel?
“It feels like conventional plastic that we use, but quite crispy….the feel of a normal plastic like we use in the grocery stores” describes Montinola.

When the two polymers are combined at a particular ration, it can also produce collagen, which means this product can also be used in medical situations when appled directly to the skin “to prevent viral infection[s] or control local bleeding”.

Commercialisation
As more and more environmental scientists signal that we are in a crisis , options to minimize our dependence on non-biodegradable plastic is becoming a much more attractive solution.

Creating a product like bio-plastic is one such solution, especially given our daily dependence on single-use plastics.

“The Philippines is the top contributor of plastic pollution in our ocean. So it's very sad and unfortunate. But right now, we don't really have a good recycling back in my country. So a lot of people are still using single-use plastic and it's a shame” laments the innovator.

Production process is a challenge
Montiola describes the process as “quite challenging”, but adds he was able to replicate it several times without any failed experiments, making it a product now ready for developing.

In fact, after being contacted by members from the Philippines Department of Trade and Industry Board of Investment, he met with them earlier this week to look at ways to commercialize his product.

“They are very interested in helping me because they have a plan in boosting the carrageenan (polymer derived from seaweed) market in the Philippines and diversify its use and they saw it with my invention” Montinola explained via message to RFI.

The meeting ended with them offering to “shoulder the expenses on the feasibility of this bioplastic” and ultimately find more investors.

The government's Department of Agriculture and Bureau of Agricultural Reseach also expressed interest in how this product can soon be “commercially ready”.

Plastic awareness
Help for the planet starts at home, where even the iconic Boracay Island in the Philippines was shut down for six months in 2018 for cleaning.

There is a growing awareness amongst the population that they are in the midst of a problem, and that awareness cuts across all age groups.

“When it rains in the Philippines, ten minutes later the cities get flooded easily because of the plastics that [are] blocking the canals” describes the scientist.

He stresses that there is no generation gap regarding pollution.

But he adds the major question now is “the old generation willing to accept the new idea of bio-plastic?”