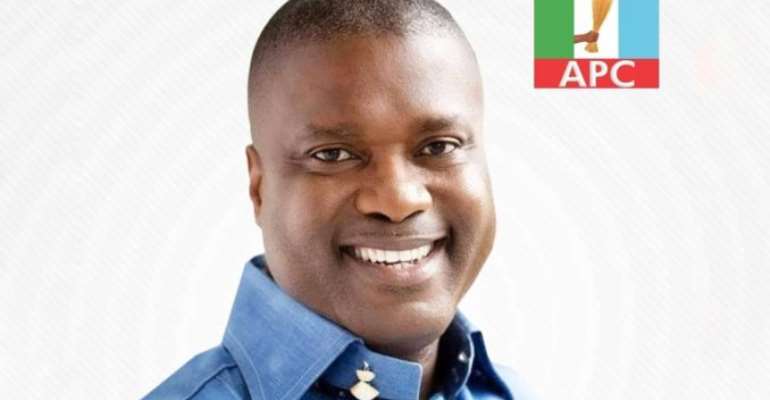 The recent treaties by defeated candidate of the Akwa Ibom State APC, Mr Nsima Ekere has presented a picture of nothing more than a party in tatters and disarray. It is a picture of a man who has inadvertently admitted that nothing within his powers can stop the already sinking status of whatever remains of his aborted ambition, and sadly, a picture of a drowning man, desperate to clutch on and drag down with him, reputable noble men of untainted history.

In the hurriedly, poorly written diatribe, the APC Publicity Secretary, Nkereuwem Enyongekere undermined the integrity of the tribunal, by alleging an attempt of bribery against the tribunal. He also claimed that they received 'credible intelligence' that the PDP and other respondents in the ongoing Governorship Petition Tribunal are making desperate attempts to tamper with the avalanche of Exhibits and other document eveidences they tendered before Their lordships.

For the first time in the history of Akwa Ibom State, we have seen an election petition that has been generally appreciated as an academic exercise undertaken by a petitioner for ego massaging, and to remain in relevance.

For the avoidance of doubt, those who have followed the proceedings at the Justice A. M. Yakubu chaired Tribunal Panel, can attest to the fact that Nsima Ekere and his bunch of confused witnesses have caused a judicial nightmare, never heard of, since the creation of Akwa Ibom State some thirty two years ago. This is a case where the Petitioner himself has admitted that he didn't win the election, thereby making the job of the Tribunal more or less a mere formalities.

In normal circumstances, a Petitioner tries to convince the law interpreters that he actually won in an election contest. This appeared to have been the case for the APC Governorship Candidate, who shortly after election had addressed a press conference, telling the whole world that he had sufficient results to prove that he won elections in 26 local government areas. However, in his petition before the tribunal, he later reduced this number drastically, claiming rather, that he won in only two local government areas.

Even an infant in elementary school would know that scoring two out of thirty one is a classical failure.

Arising from Eyongekere's unwarranted outburst, one is forced to pose these questions on which Exhibits they could be talking about? Is it the ones INEC begged them to come and receive but they never did? Or the ones they dumped at the Tribunal without making efforts to tender before the Tribunal?

In any case, Nsima Ekere had said he has no need for those documents again and won't make reference to them as he wants the entire elections canceled.

In whose interest are those non-admitted exhibits when it is common knowledge that when a material is not admitted in open court as Exhibit, it is only good enough for the dustbin.

Talking about Enyongekere's reference to PDP's in such unkind terms, it is worthy to refer to reports from the tribunal that Prof. Ernest Ojukwu SAN, Counsel to the Petitioner, whose action raised suspicions.

Why can't APC and its candidate advise Prof Ojukwu who attempted surreptitiously to smuggle exhibits without the knowledge of the tribunal, forcing Justice A. M. Yakubu to frown seriously at him.

Keen followers of the tribunal can recall that the PDP star Witness, Barr. Emmanuel Enoidem while being docked, took time to submit units, wards, Local Governments and State results to show how PDP clearly won election in the State, whereas, APC failed to show documents to buttress their point, hence their decision to discard their earlier position.

Between PDP and APC, who needs to steal results? Simply put, how can the PDP steal what the APC doesn't have?

We have also noted that from the inception of this Tribunal, the APC has repeatedly called for the relocation of the Tribunal to Abuja, and are still looking unrepentant, even when the Tribunal is on the verge of rounding up proceedings.

What is particular about Abuja?
Is this not a confirmation of the earlier reported allegation of some highly placed politicians in Abuja, who APC boasted could be used to influence Tribunal Judges?

What evidence can they present in Abuja that they can't present here in Uyo?

Are they saying that if the Tribunal had sat in Abuja, they would not have called for cancellation of the result?

Are they saying that they would have had more witnesses in Abuja than they ones they presented here in Uyo?

Would Abuja have helped them keep their lead Counsel J. S. Okutepa,SAN, who has been absent since the Respondents commenced defense last week?

It smacks wolf cry and ridiculous display of rascality for APC to warn the Tribunal against being induced with huge financial payments. Anybody that has been witnessing proceedings at Court 8, Tribunal 3, would attest to the high integrity displayed by the three-man panel. Only an insane mind would dare go on the media to allege bribery against those noble jurists. First it was Mike Igini the INEC REC, now the attack has shifted to the eminent jurists, pointing clearly to the straw clutching mechanics of Ill advised losers.

Finally, let us remind the APC in Akwa Ibom State that what is going on at the Tribunal is nothing short of a funeral ceremony, preparatory for their final burial.

This is the more reason they should appreciate the fact that the Tribunal sits here in Uyo, because of the economic implication of transportation of the dead from a distant shore like Abuja.