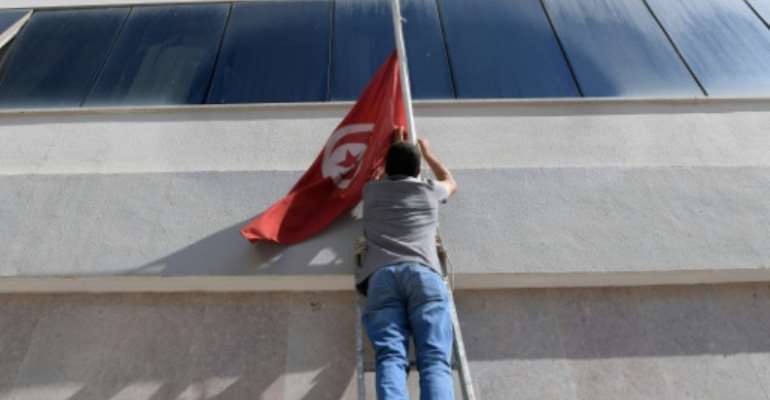 Presidential polls will be held next month, following the death in July of leader Beji Caid Essebsi. By FETHI BELAID (AFP/File)

Tunisia's Islamist-inspired Ennahdha party announced a presidential candidate for the first time Wednesday, ahead of polls next month.

"The party's advisory council has voted by a majority of 98 votes in favour of Abdelfattah Mourou's candidacy at the presidential election," Ennahdha said in a statement.

The Ennahdha politician had previously served as the deputy speaker, and changed roles after the then parliamentary head Mohamed Ennaceur stepped up as interim president.

The party's announcement marks "the first time in its history that the movement puts forward a candidate for the presidential elections," spokesman Imed Khmiri said.

Ennahdha won the first polls after the 2011 uprising which ousted autocratic president Zine El Abidine Ben Ali, and is currently the largest party in parliament.

Mourou is known as a moderate and is one of the founding members of Ennahdha, which was launched in 1981.

Presidential hopefuls have until August 9 to register, ahead of the election on September 15.

So far 27 people have submitted their candidacy to the electoral commission, including media magnate Nabil Karoui.

He was charged with money laundering in July, after stating his intention to stand in the polls.

Karoui is a fierce rival of Prime Minister Youssef Chahed, who is standing in the presidential vote with his Tahia Tounes party.

They have been joined in the race by Abir Moussi, who heads a group formed from the remnants of Ben Ali's ruling party.

She has called for the exclusion of Islamists, including Ennahdha.