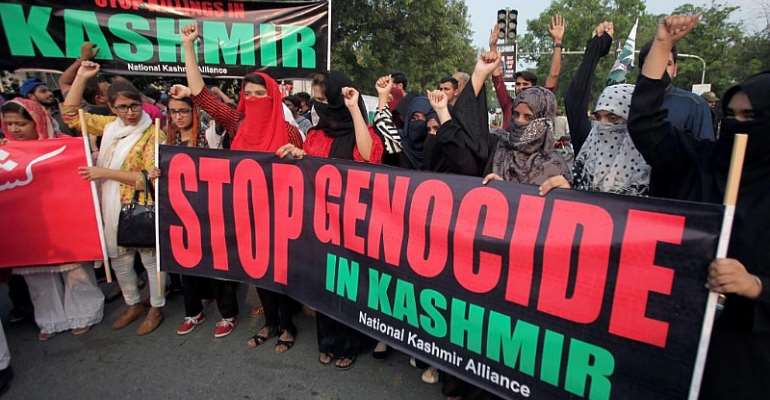 Imran Khan, the Prime minister of Pakistan, said that India's move was in breach of international law and promised to raise the issue with heads of States at every forum.

Khan also said that Pakistan will take the matter to the International Criminal Court.

He accused India's Prime minister Modi of violating international law in pursuit of an anti-Muslim agenda in India, adding that the ruling Bharatiya Janata Party (BJP) follows a "racist ideology.

"I am afraid that [India] will now carry out ethnic cleansing in Kashmir," he said.

India accuses Pakistan of supporting the separatist insurgency - an accusation Pakistan denies - saying it gives only moral and diplomatic support to Kashmiris who want self-determination.

The world must act today
"If the world does not act today... (if) the developed world does not uphold its own laws, then things will go to a place that we will not be responsible for," Khan added.

“Two nuclear powers cannot take such risks. We should be able to resolve our problems through dialogue. If there is a war, there will be no winners but worldwide consequences”

Pakistan's General Qamar Javed Bajwa said that the Pakistani Army firmly stands by the Kashmiris “in their just struggle to the very end.”

“We are prepared and shall go to any extent to fulfil our obligations in this regard,” he said.

Prime minister Khan warned that “there will be reaction” from Kashmiris, likely to lead to suicide attacks.

Kashmir blackout
The Indian government enforced a curfew and shut down most communication, including internet, cellphone and landline networks.

Thousands of additional troops were deployed to the already heavy militarised region.

Police, on Wednesday, confirmed that a protester died after being chased by security forces during the curfew in Srinagar. Six people have been admitted to hospital in Srinagar with gunshot wounds and other injuries following protests in the city.

Hundreds of people around Pakistan and the portion of Kashmir it controls rallied against Modi, burning him in effigy and torching Indian flags to condemn India's moves.

The controversial Jammu ans Kashmir Reorganisation Bill passed in India's Parliament changes Jammu and Kashmir autonomous status to a union territory, and carves out Buddhist-majority Ladakh as a separate union territory without a legislature.

The surprise measure was introduced alongside a presidential order. That order dissolved a constitutional provision, known as Article 370, which gave Kashmiris exclusive hereditary rights and a separate constitution.

On Tuesday, the lower house approved the bill, a day after the upper house approved it by a two-thirds majority, with many opposition lawmakers voting with the ruling Hindu-nationalist BJP.